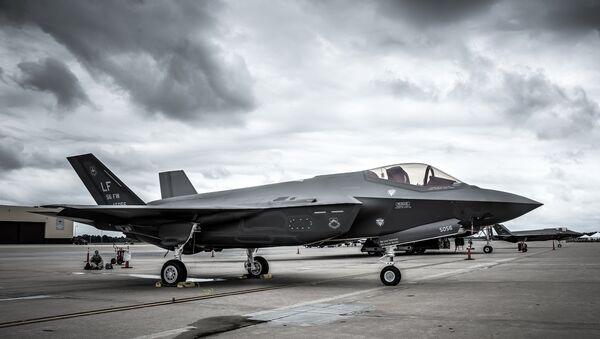 Ankara is planning to buy US-manufactured F-35 fighter jets amid concerns that the transfer might be cancelled, according to Turkish President Recep Tayyip Erdogan. Radio Sputnik discussed Ankara's plans with Abdullah Bozkurt, president of the Stockholm Centre for Freedom and Author of 'Turkey Interrupted - Derailing Democracy'.

Sputnik: Why is Turkey pursuing the purchase of the jets? How much of a role did US warnings over S-400 play here?

Abdullah Bozkurt: Basically Turkish air defence is pretty much based on US technology which is staffed by the F-16 fighter jets before and now they're aiming to replace them or support them with the F-35 next generation stealth fighter jets. So this has been on the table for many years, but in the last couple of years there have been a lot of troubles on the bilateral level and the delivery and the transfer of the F-35s might be in jeopardy, basically because of two reasons: one is, of course, the Turkish government's arrest of US nationals or Turkish nationals who are working as local employees of the US Embassy staff and the other, is the transfer of the Russian S-400 long-range missile system.

Sputnik: Turkey and the US are on very different sides of the coin when it comes to certain issues in Syria and there's news actually about the fact that Turkey wants to launch an offensive on the PKK, which they consider to be a terrorist organization, which the US also does, but they're actually supporting the Kurdish forces which Turkey is calling terrorist, the PKK. What about the situation in Syria, because the US and Turkey do see the situation very differently?

The Best Defense? Japan’s Controversial F-35 Carrier Upgrade Confirmed
Abdullah Bozkurt: You're right, there are significant differences in the Syrian theatre between the United States and Turkey. I think the main motivation on the part of the Americans is they don't trust the Turkish government in cracking down on the jihadist network in Syria. In the fact, some of these groups are actually supported by the Turkish government financially and militarily, so they had to switch to local forces to do the job in some parts of Syria. I think the trust issue has pretty much played into this equation. Initially they thought they can rely on the Turkish military in consolidating the gains and cracking down on ISIL [Daesh], Al Qaeda and other jihadist groups, but there are a lot of elements actually emerging on the public record that the Turkish government is aiding and abetting jihadist groups. But so far at the tactical level, so they had to rely on the local forces, despite the fact that the Turkish government says "we see this group as a terrorist group". So I think when dust settles down eventually in Syria, we may see a convergence rather than divergence of the Turkish and American interests in Syria.

Sputnik: Actually there has been some criticism regarding the F35s, some say they're too expensive and they have some significant deficiencies. Do you think that is correct? Are there really problems and how lucrative is the deal for Turkey?

Abdullah Bozkurt: This is not a new subject, we've been hearing this since the programme started; it is very costly, I think everybody acknowledges that the price keeps rising up, but technology-wise I think many agree on the point that this is a new generation stealth technology and there's a lot of pluses if you have this in your own air force. But economically, of course, it's a hugely costly program, but there's no alternative to that. If you start buying this American machinery technology from the start, then you're going to keep purchasing the same material, because all the supply chain system is pretty much based on this technology, it's not just buying one aircraft, it's a whole service and the supply chain sector comes with it. So if you quit the program, then it is not going to be easy to replace by buying from another country another aircraft. So it's like buying an automobile: if you don't have spare parts, if you don't have a maintenance in place in advance, then when you'll have trouble operating the automobile, then you'll have a very difficult time. I think the same also applies to F35, which is a very costly, but it's got advantages in defence technology that you're actually acquiring.

Sputnik: What do you see going forward for relations between Ankara and Moscow and Ankara and Washington on the back of all of these weapons deals?

Abdullah Bozkurt: Well, if President Erdogan's remarks at the rallies on Sunday reflect actually what he's thinking, then the Turkish government is going to dump the Russian contract, although they played around with this, they made a deposit payment and they've said a lot of times that they're not going to back out from the deal, but Erdogan's specifically saying that we're going to have 120 F-35's and we're also going to have some technology with this as well. I think the Americans are really putting pressure to make a choice for the Turkish government going back to the NATO alliance and put some distance between Turkey and Moscow, but that's not easy, it's easier said than done.