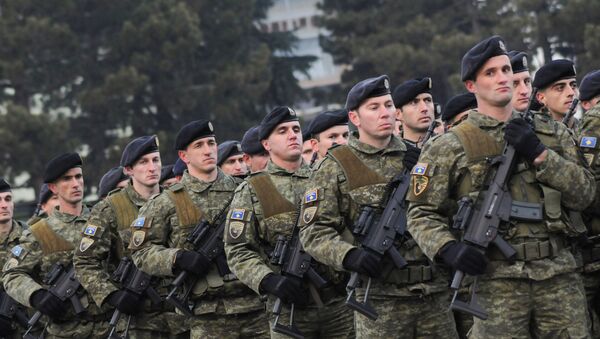 WASHINGTON (Sputnik) - Russia regrets that the European Union has failed to adequately respond to Kosovo's decision to transform the Kosovo Security Force into a national army, Russian Ambassador to the United Nations Vassily Nebenzia told the Security Council on Monday.

"We've been very disappointed by the position of the European Union. On the one hand, it claims to play the role of an objective mediator," Nebenzia told the Security Council on Monday. "On the other hand, it disregards the illegal creation of the Kosovo army. The reaction of the EU to the latest decision of Pristine can only be called toothless."

Serbian President Accuses US, UK, Germany of Helping Create Kosovo Army
Moreover, the decision to transform the existing security forces in Kosovo into an army is in blatant violation on UN Security Council resolution 1244, Nebenzia said.

Russian envoy to the United Nations also stressed that the Balkans remain a fertile ground for radicalization.

"The region continues to be a fertile ground for recruiting radicals,” Nebenzia said. "Terrorist returnees from Syria and Iraq take refuge there." Nebenzia added that the rate of return for refugees and internally displaced persons to the Balkan region remains highly unsatisfactory.

"There is a real threat of humanitarian crisis due to the introduction by Pristina of protective tariffs on the import of goods from Serbia," he added.

The decision by the ruling Albanians in Kosovo to create an army has been criticized not only by Serbia, but also by NATO, with the alliance's Secretary General Jens Stoltenberg saying such actions were "ill-timed."

Meanwhile, representatives of the EU8 countries at the United Nations delivered a statement on Monday urging Kosovo and Serbia to use restraint, lower tensions, and work towards resuming their dialogue.

Kosovo’s Future Army to Be NATO Ally - Leader Thaci
"We call on both sides to take steps to exercise restraint and to lower the tensions and create the conditions to resume as soon as possible their dialogue as facilitated by the EU High Representative. A binding agreement addressing all issues should remain the key priority," the statement said.

Serbia's Ambassador to Russia Slavenko Terzic told Sputnik on Friday that Belgrade is interested in continuing constructive talks with Kosovo but does not expect a "sober dialogue" due to Kosovo's decision to create its own national army.