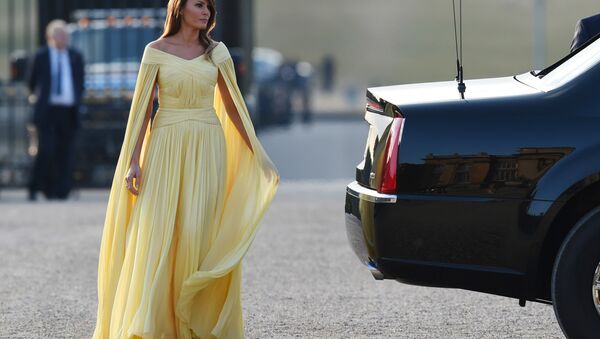 Although the First Lady has largely stepped away from her husband's war or words with American mainstream media, she is no stranger to frequent criticism coming from news outlets. Her supporters claim, however, that the media put the spotlight on the trivia, while missing out the most important things about her job.

Melania Trump's spokeswoman went on a fiery rant against media bias towards her boss after a CNN report suggested the First Lady saw her popularity fall to its lowest point since Donald Trump's inauguration.

Spokeswoman Stephanie Grisham lamented that the media "consistently" ignore Melania's First Lady job, including her anti-bullying Be Best campaign, meetings with families of members of the military, visits to children's hospitals and immigration facilities and efforts to raise drug awareness.

Media, Trump Must ‘Tone Down’ Rhetoric After 2018 US Midterms - Columnist
Instead, Grisham claimed, news outlets focus on the trivia — taking aim at Mrs. Trump's outfit choices and kicking around the cost of her shirt. "Of course, absurdity abounds in the media's coverage of our first lady. Reports focus on the trivial and superficial, rather than the deeper issues facing our country that the she has tirelessly worked to address", Grisham wrote in an op-ed for CNN.

"The media also has the opportunity and responsibility to report fairly, accurately and without bias. They are, in fact, writing the first draft of our nation's history. In many ways, they are failing to measure up to this responsibility. This failure must be addressed."

Her stinging rebuke came after CNN contributor Kate Brower surmised that Melania Trump "doesn't understand what it means to be First Lady". She chastised the FLOTUS for prioritising her family's legacy over seizing the opportunity to talk about the challenges she considers important.

A CNN poll showed this week that Melania Trump's approval ratings plummeted 11 points to 43 percent in the past two months, while her unfavorable ratings went down six points to 36 percent — the lowest since her husband assumed office in January 2017.