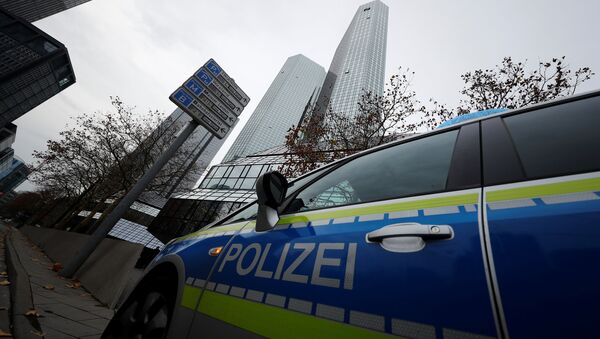 © REUTERS / Kai Pfaffenbach
Subscribe
In August, investigators reportedly tracked down a group of at least five police officers in Germany reportedly exchanging neo-Nazi messages and images in a chat, something which is considered a serious offence in Germany.

Criminal police in the German federal state of Hesse (LKA) have launched a probe into an alleged "neo-Nazi network" in the Frankfurt police force, according to the Frankfurt Allgemeine Zeitung (FAZ) newspaper.

FAZ quoted LKA officials saying they don’t rule out the possibility of the investigation turning into a case of "much greater dimensions."

A group of four male policemen and one female police officer have been suspended from duty, pending an investigation. A special investigative group has been established by the LKA after the five officers reportedly sent a faxed letter with threats to Seda Basay-Yildiz, a lawyer of Turkish background who represented Islamic extremists in court.

"Dirty Turkish sow, you're not going to destroy Germany. You better pi** off as long as you can still get out of here alive, you swine!" the letter read.

The Frankfurter Neue Presse newspaper, in turn, cited Basay-Yildiz saying that she was not particularly concerned about this part of the letter which she said looked like many other hate letters she had received.

According to Basay-Yildiz, she was strongly alarmed over the letter's threat, saying: "… in retaliation we will slay your daughter." The name of her two-year-old daughter and her address — which she said are not public knowledge – followed the menacing statement.

German Store Under Fire for Selling 'Nazi Toys'
The letter was signed with "NSU 2.0.," a reference to a German neo-Nazi terror group National Socialist Underground, which was especially active in the 2000s.

The group was tracked down in August when investigators detected their sharing neo-Nazi messages and images in a chat group, in what is considered to be a grave offence in Germany.

Earlier this year, the investigation team uncovered a police computer, which was used to obtain Basay-Yildiz's personal information without an official reason.