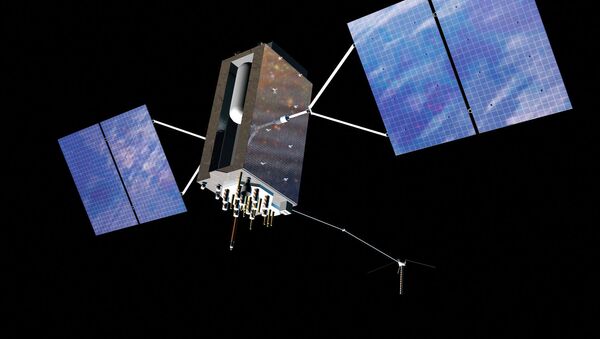 © US Air Force
Subscribe
International
India
Africa
The US Air Force is readying its first launch of a new generation of global positioning satellites. However, the program is behind schedule, over budget and generally fraught with problems.

The first of 32 planned GPS Generation III satellites is scheduled to launch Tuesday from Cape Canaveral, Florida, an event that is already two-and-a-half years behind schedule. The project is also 6 percent over budget, and although the Air Force boasts that the price will eventually fall substantially per unit, the Government Accountability Office (GAO) isn't so optimistic. Plus, the ground control system is in even worse shape.

Cristina Chaplain, who tracks GPS and other programs for the GAO, told AP that the first 10 GPS Generation III satellites are estimated to cost $577 million each. However, while the Air Force said in September that the remaining 22 satellites are expected to cost a total of $7.2 billion — which would be $327 million each — the GAO thinks the cost will only fall by $32 million per unit, for a total remaining cost of $12 billion.

Raytheon's OCX ground control system is four years behind schedule and projected to run $2.5 billion over its $3.7 billion budget, according to the GAO. The system isn't very secure, either, with Breaking Defense noting in February 2016 that it wasn't meeting Defense Department cybersecurity standards and that Lockheed Martin, which is responsible for the overall Gen III program, had been asked to draw up an interim fix itself. Only last month did OCX finally pass its cybersecurity vulnerability tests.

Once up and running, however, the satellites will be a substantial improvement over the Block II series, which were launched between 1989 and 2016. AP notes that over 4 billion people use GPS for navigation and that it also performs time-stamping on bank transactions.

In addition to a doubled lifespan, the Block III satellites will be three times as accurate as present GPS satellites, being able to pinpoint one's location to within three to 10 feet, according to Glen Gibbons, the founder and former editor of Inside GNSS, a website and magazine that tracks global navigation satellite systems.

The new satellites' signals will be stronger, too, and less vulnerable to jamming. They'll also be compatible with other countries' navigation satellites, such as the European Union's Galileo system.

However, due to delays in OCX, many of these features won't be available until at least 2022, Gibbons noted.

"The world is dependent on GPS. More than 4 billion military, commercial and civilian users connect with signals generated by GPS satellites every day," said Johnathon Caldwell, Lockheed Martin's vice president for navigation systems, in a December 11 statement. "The launch of GPS III SV01 will be the first step in modernizing the Air Force's GPS constellation with the most powerful and resilient GPS satellites ever designed and built."

Tuesday's launch itself is somewhat historic, being the first time the Air Force has contracted SpaceX to launch a GPS satellite on their Falcon 9 rocket. The satellite is nicknamed "Amerigo Vespucci," for the Italian explorer who first recognized the Americas as separate continents from Asia, and for whom they were subsequently named.

However, even as the Air Force moves to replace its aging GPS satellite constellation with new ones of a similar design, the Pentagon's Defense Advanced Research Projects Agency (DARPA) has been hard at work trying to adapt civilian technology in order to make a new generation of small, cheap and disposable GPS satellites.

In November, SpaceX received approval from the Federal Communications Commission (FCC) to launch a dizzying 11,943 satellites into low-Earth orbit (LEO) for its Starlink broadband network. The satellites orbit only a couple hundred miles above the Earth's surface, compared to the distant 10-22,500 miles at which present GPS satellites orbit. Tuesday's launch will put its payload roughly 11,000 miles out, according to an Air Force fact sheet.

DARPA has earmarked $117.5 million for its Blackjack Program, aiming to adapt SpaceX's technology to replace its lumbering GPS satellites, which are expensive to design and launch, with a constellation similar to Starlink. The Air Force in particular considers its mere 32 GPS satellites to be vulnerable to attack or disruption in the case of conflict — a capability both Russia and China have demonstrated.

DARPA hopes to have 20 prototype Blackjack satellites in LEO by 2021, which will weigh in somewhere between 220 and 880 pounds and only cost about $6 million per unit, according to project developer Paul Thomas. Compare that to the Block III being launched Tuesday, which is a hefty 4,764 pounds.