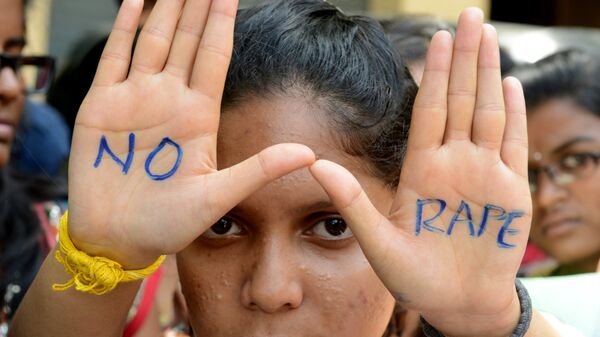 The lens of global media has zoomed in on India over the past few years for a high-resolution focus on the country’s problem with rampant sex crimes against young woman, and even children. This week, another incident has thrown into stark relief the fact that the issue isn’t going away any time soon.

A three-year-old girl in has been left hospitalised in the Indian capital of New Delhi after being raped, according to reports.

The city's authorities have released a statement saying that the small child was discovered in a state of unconsciousness after a "brutal" attack. She was subsequently taken to hospital for emergency care where, according to Indian media, she is now fighting for her life.

A 40-year-old man who works as a security guard in the same building where the young girl resides with her family has reportedly been arrested for the attack and is languishing in police custody at time of writing. The man was allegedly bayed and beaten in the streets by locals after they discovered that he was accused of the crime.

Swati Maliwal, a local official, has been quoted as saying that she visited the hospital where the young girl is being cared for, adding that "she is bleeding profusely and it is very critical… The child is battling for her life."

6 years after student was fatally gang-raped on bus, #India rocked by report of a 3-year-old's rape. https://t.co/I5MzElywVB pic.twitter.com/YWz808eoy8

​Unfortunately, the latest story is only but one in a grim litany of child rapes across India, part of a larger problem of sexual predation that almost appears to be endemic to the South Asian country. Even the most cursory Google search for news on rape crimes in India this year alone results in an overwhelming number of articles.

Chandni Bakshi, a local activist in New Delhi who tries to raise awareness about the plight of victims of sex crimes in India told Sputnik that the problem is truly engrained in society, but attitudes towards it are indeed changing.

That is sure important and very proud that India has not forgotten the tragic rape of a 3 year!! Three years old just horrific! We are all in this battle together in child rape and abuse in that form!! Tragically Concentration camps through 23 states stuff happening like this!

​"India has a big problem with rape crimes. Beforehand it was heavily socially stigmatised to be a victim of rape. People didn't really talk about it much, but knew it was going on in the shadows, like a dirty little secret. Tradition can also be a problem. Victims in villages would sometimes rather talk to a tribal elder about their attack, rather than the law. But Since 2012 things have changed a lot."

2012 was a particularly poignant year, and a turning point, for social awareness and acknowledgement of India's ongoing problem with casual rape.

On the evening of December 16 of that year, a 23-year-old girl was gang raped at the back of a bus for over an hour by a group of alcohol intoxicated men as they cruised around the capital city. The girl was with a male friend who was reportedly beaten to within an inch of his life. The two were subsequently dumped by the side of a road during the dead of night. The female victim's injuries were so severe that some of her internal organs reportedly had to be removed. She died two weeks later in hospital.

Four men were eventually indicted and sentenced to time in prison, but activists and human rights groups decry a system that they argue does not mete out harsh enough punishments against predatory sex offenders. There has even been an increase in calls for offenders to face the death penalty.

Sometimes the women who change history are victims of terrible crimes. In 2012 Jyoti Singh Pandey was beaten, gang-raped and tortured on a bus in India. She died of her injuries, which prompted India to adopt stringent anti-rape laws. https://t.co/9fszaXL15a pic.twitter.com/hcl42wcQRs

#India Hangg The Rapist Till Death Same Like Other Country As Soon As Possible…… pic.twitter.com/rZ3O2p4YGX

"That girl did not die, she was murdered. The men not only raped her, but violated her with a long iron rod, which caused internal bleeding. Many people were so disgusted and outraged that a movement kind of took off from there to try and stop this from happening again. We put our trust in the authorities to stop the problem, but unfortunately we're now losing hope again."

Indeed, the loss of hope is justified as the problem has not stopped.

According to Indian government statistics, a woman is raped every 22 minutes on average across the country, and the ugly phenomenon shows no obvious signs of abating.

Child rape is said to account for at least 40% of nationwide cases. The situation became so dire in 2018 that Nobel Laureate, Kailash Satyarthi, declared it a "national emergency." Various reports suggest that there are hundreds of thousands of cases of rape against young woman and minors pending in the Indian courts.

On the sixth anniversary of a very brutal gang #rape on a bus in #India, another 3-year-old girl is now India's latest victim of sexual assault.

She was allegedly raped by a neighbour on Sunday in #Delhi.#MondayMotivation#TheWorldReacts pic.twitter.com/gWT1v9nuwM

​Other high-profile cases include the abduction of five Christian charity workers in the country's remote east in July of this year. The woman were allegedly seized at gunpoint and video-taped while being gang raped.

In December 2017, a six-year-old girl was kidnapped from her own bedroom, raped and murdered, with her mutilated body found close to her home. The mother of the child echoed the same sentiment as Miss Bakshi that the authorities are proving unable to stem the violence, telling the BBC's Hindi service that she has "no faith" in local police.

Then, in three separate incidents in April 2018, three teenage girls were raped and set on fire all in the same week in the eastern province of Jharkhand. In one of those attacks, a 16-year-old died after being soaked in petrol and burned alive. In another, a 17-year-old was left struggling for her life in hospital after being raped and set ablaze by a man she refused to marry.

Beti Bachao in India…Hang those who rape..I don’t consider them as Humans at all and no mercy is should be shown on those. pic.twitter.com/fDJjrOGhg6

The nauseating list of these attacks goes on and on, and there is widespread belief that many more go unreported.

India's bombastic president, Narendra Modi, has stridently declared that "India's daughters will get justice." Yet Miss Bakshi tells Sputnik that she isn't so convinced.

"For a start, Mr Modi has lawmakers in his own party that are accused of rape, or supporting other influential figures, such as big businessmen, who are accused of rape. But solving the problem is far beyond the capabilities of one politician. Police simply don't have the investigative manpower to track down these criminals in densely populated and expansive areas, where its easy for them to just escape into the crowded city or countryside and disappear. On top of that, some woman stay quiet because of social stigma. But yes, there is also the feeling that the government only acts if and when there are huge protests among angry citizens, only then do they bother to do something."

#LestWeForget Today 16 Dec #DelhiGangRape2012 The critical work to end rape/other forms violence against women/girls needs strengthening at all times. Every 22 min a rape occurs in #India 40 percent of victims are minor children & conviction rate of rape #India is a shocking 29% pic.twitter.com/XBjujpVZ7D