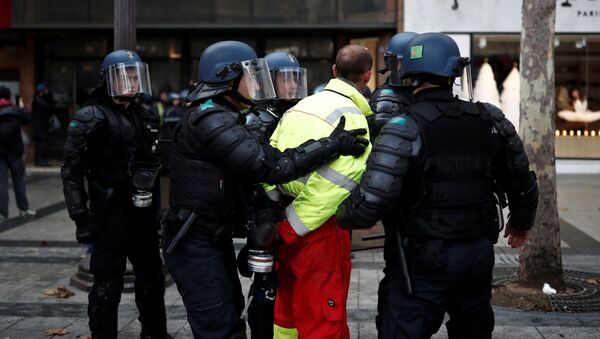 © REUTERS / Benoit Tessier
Subscribe
International
India
Africa
PARIS (Sputnik) - A total of 179 people have been detained during a fresh round of mass "yellow vest" rallies in the French capital on Saturday, the BFMTV broadcaster reported on Sunday.

The BFMTV broadcaster reported that 144 of the detainees had been taken into custody. Nine people are reported to have sustained injuries.

According to the police, more than 2,000 protesters participated in Saturday's rallies, down from 10,000 last week. The number of protesters across France halved to 33,500 people from 77,000 recorded on December 8.

A Sputnik correspondent reported that everything was peaceful in the capital on Sunday. Subway stations that were closed on Saturday have reopened and traffic near the Champs Elysee and the Arc de Triomphe has been restored as well.

France has been facing a wave of mass protests since mid-November, when the so-called yellow vest ralliers took to the streets to protest rising fuel prices and a planned hike in tax on diesel and carbon fuels. The French government has scrapped its planned hike in diesel taxes, but the "yellow vests" have since morphed into a broader movement against government policies and rising living costs.