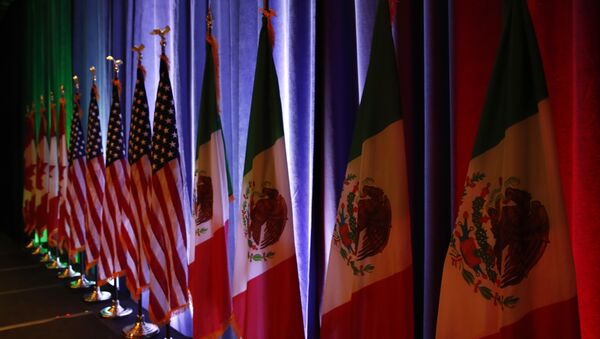 Kristian Rouz — Mexico's new cabinet has promised a fiscal surplus in its 2019 budget, saying the government will be able to collect enough revenue to pay for its promised increase in welfare spending and overall budget.

According to a statement issued by recently appointed Finance Minister Carlos Urzua, the government will seek new sources of revenue, while also aiming to pay off some debt to exclude interest payment from its balance sheet. The official said several Mexican ministries could see lay-offs, while the entire government apparatus is likely to be scaled down.

Trump, Nieto, and Trudeau Sign US-Canada-Mexico Trade Deal Replacing NAFTA
Moreover, Urzua said these and other measures will improve the efficiency of Mexico's federal governance, while allowing authorities to increase youth unemployment benefits and pension payments for elderly citizens. He also suggested Mexico could post a fiscal surplus next year due to its robust economic growth.

"The new government's 2019 budget proposal is fiscally responsible both on the cover and in the details," Gabriel Casillas of Banorte bank said.

The government said it expects GDP growth to slow to two percent next year compared to this year's estimated expansion of 2.3 percent. This is roughly inline with analyst's forecasts, as experts have projected Mexico's GDP growth rate to fall to 1.8-1.9 percent in 2019.

Mexican President Weighs Bids on Huge New Oil Refinery Construction
Officials also said the government's fiscal surplus could increase to one percent of GDP next year, up from this year's surplus of 0.7 percent.

In a separate statement, Mexico's Finance Ministry said its fiscal policies will be based on 'prudence, transparency, responsibility and objectivity'. Officials said some 20 percent of Mexico's budget revenue will come from the oil industry, while 62.3 percent will be drawn from tax collection.

Mexico's projected inflation for the next year stands at 3.4 percent, according to government estimates, while market analysts have estimated it to be at 3.95 percent. For his part, Urzua said he would implement elements of fiscal austerity which might be conflicting with his simultaneous promise to increase public spending.

The budget proposal has already been presented to the Mexican Congress, which is expected to pass it with possible minor amendments. Generally, Mexican lawmakers are not expected to stiffly oppose the cabinet's initiatives as long as the government maintains its mildly centre-left rhetoric.

"This budget is not a piñata. It is a national programme," president of the lower chamber Porfirio Muñoz Ledo said.

However, after reviewing the proposed fiscal plan, analysts warned that Mexico could struggle to address emerging risks to its macroeconomic stability next year, as the budget hardly allows for any additional fiscal stimulus, should they be necessary.

"The key question for investors and markets will be whether the administration is ultimately strongly committed to deliver the approved primary fiscal target or not," Alberto Ramos of Goldman Sachs said.

Coming into the new year, Mexico faces numerous economic risks, including the threat of a major decline in oil prices, international trade tensions, and, of course, a possible full shutdown of the US-Mexican border, which could affect bilateral trade.