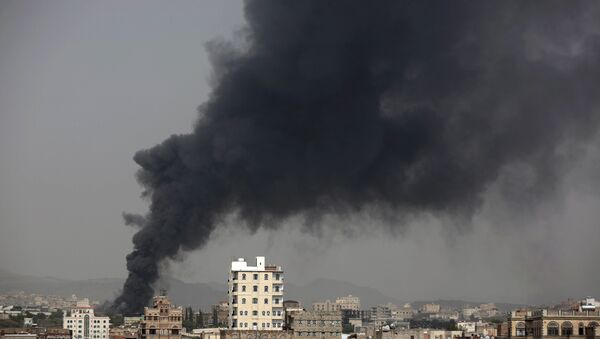 MOSCOW (Sputnik) - The Arab coalition launched new airstrikes in Yemen's Al Hodeidah despite the agreements that were reached during the negotiations in Sweden, a source in Yemen's Ministry of Defense told Sputnik on Sunday.

According to the source, the bombing affected the Isa area of Al Hodeidah.

The source added that the coalition had also launched an airstrike in the province of Al Bayda, leaving two children killed, as well as bombed the northern province of Saada, located on the border with Saudi Arabia and considered to be a stronghold of the Houthi movement.

The strike comes after one-week UN-mediated talks on Yemen crisis settlement finished earlier in December. The sides agreed on a governorate-wide ceasefire and withdrawal of forces in Al Hodeidah, the establishment of a UN-chaired committee to monitor the process, a prisoner exchange, and humanitarian corridors to the city of Taiz.

Houthi Militants Capture UN OHCHR Employee in Hodeidah
The fighting has recently intensified near the Houthis-controlled city of Al Hodeidah, through which the rebels receive humanitarian and commercial cargoes. The Yemeni government, in turn, claims that the port city is receiving weapons from Iran.

Iran, in turn, responded to the allegations on Saturday, once again stressing that Tehran never provided weapons to the Houthi movement in Yemen.