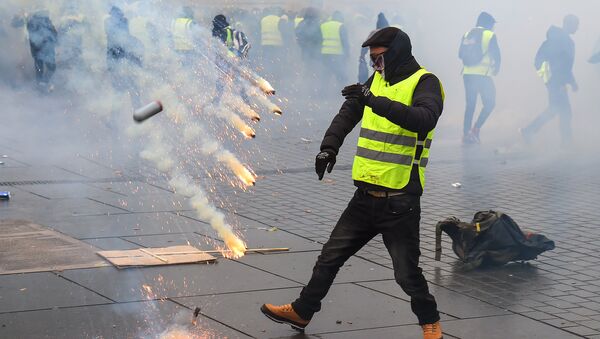 Despite Emmanuel Macron’s conciliatory speech on Monday, during which he pledged he would raise wages, cut taxes and give out bonuses, the Yellow Vest protest movement has not backed down. Sputnik spoke to Professor of French Studies at the University of Warwick, Nick Hewlett to ask what can be expected from the Gilets Jaunes this weekend.

Sputnik: Was the motion put forward yesterday in the French parliament purely symbolic, given the safe position Macron's party holds in Assemblee Nationale?

Professor Nick Hewlett: I think it was really pretty symbolic, I think it was the forces of the left getting themselves together; and with the background of the Gilets Jaunes protest of course, what they were trying to do was to remind the government that the Gilets Jaunes protest was being reflected in parliament in some way or another. As I understand only 70 out of 577 MPs or deputies, voted in favour of the motion; there was a little bit on the parliamentary channel and there was a pretty relaxed atmosphere, to be honest.

'Yellow Vest' Protester Dies in France After Being Struck by Truck - Reports
Sputnik: The Gilets Jaunes had called on a '5th Act' this weekend; do you think we will see that scaled down now after the terror attack in Strasbourg, and will it affect the movement in the longer term?

Professor Nick Hewlett: I think it will certainly affect the movement in the immediate term, yes. As you say the media spotlight has gone right off the Gilets Jaunes and the on to the terror attack. Now that the terrorist has been tracked down and indeed killed, and the market is getting back to normal and so on, it's possible that the spotlight will go back on to the Gilets Jaunes, but I think it's probable the momentum has gone out of it. Added to that the sympathy for the police has increased, over the terror attack, and the police trade unionists are saying that the police are exhausted, particularly with the Gilets Jaunes protests but also with the hunt for the terrorist which took around about 1000 officers' time for three days non-stop of course.

Sputnik: Have Macron's conciliatory measures outlined in his speech on Monday had any impact on the Gilet Jaunes movement?

Professor Nick Hewlett: They will have certainly had some impact, yes. Particularly after the headline offer of 100 euros a month increase in the minimum wage — that's the major concession. If you look at it a bit more closely, it's not quite as generous as it was thought to be when he gave his speech. But he has certainly made some concessions and some people will be — happy is an exaggeration — but some people will be somewhat mollified. Whether the fact that, for example, the concessions don't do much for people who are above the minimum or for people who are unemployed, whether this will have an effect on the movement I don't know.

Sputnik: The media has been dominated by the terror attack in Strasbourg and has given little coverage of the Gilets Jaunes this week, indeed it was a struggle to find any information about what was happening with the vote in the Assemble Nationale yesterday. What impact may this lack of media coverage have had on their movement do you think?

Professor Nick Hewlett: I think really the fact that the media spotlight has gone off the Gilets Jaunes for the moment anyway — will have a sort of puncturing effect on the movement. I'm not saying it's over by any means and it's quite possible that it will rear up again sooner or later. My best guess is that tomorrow's demonstrations — Act 5 — will be less impactful than they have been and probably there will be fewer demonstrators but we will have to see.