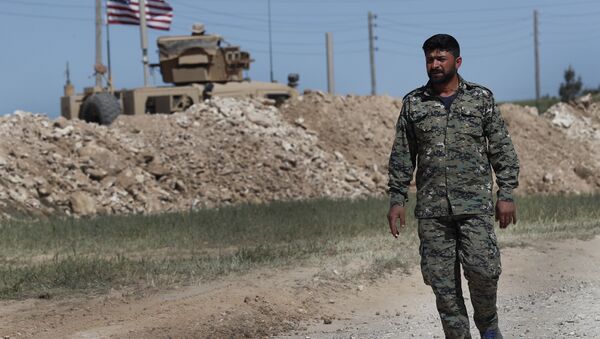 "Yes, of course", Kalin said, when asked whether the two leaders had discussed a possible operation in Manbij.

Erdogan shared with Trump his concerns over the YPG's growing military presence, which is supported by the United States, and he agreed with the president to coordinate military actions on the Turkish-Syrian border, Kalin added.

"So, our military has now been instructed to coordinate their efforts on the ground so that we don't have this terrorist activity along the Turkish-Syrian border", Kalin said.

The statement comes after Erdogan said on 14 December that Ankara was ready to launch an operation in Syria's Manbij against the Kurdish People's Protection Units (YPG) if the United States does not withdraw them from the area. Erdogan discussed the situation in Syria with Trump on the same day.

Turkish-US Patrols of Syria's Manbij May Start 'Today or Tomorrow' – Report
Turkey and the United States have had tense relations in recent years, in part due to Ankara's concerns over US support for the YPG, viewed by the Turkish authorities as an affiliate of the Kurdistan Workers’ Party (PKK), listed as a terrorist organisation in Turkey, the United States, and the European Union. Ankara has also repeatedly accused Washington of failing to fulfil its promises regarding the withdrawal of the YPG from Syria's Manbij.

Turkey has been claiming that the YPG presence near its border hampers its national security. Earlier this year, Ankara conducted an offensive against the Kurdish militia in Syria's northern border city of Afrin. Turkey is also currently engaged in an operation to eliminate Kurdish strongholds in northern Iraq.

Coordination of Actions in Syria With Russia, US to Avoid Conflicts

Turkey wants to coordinate its actions in Syria with Russia and the United States to avoid any confrontation in the area, Ibrahim Kalin, the aide of Turkish President Recep Tayyip Erdogan, told reporters on the sidelines of the Doha Forum.

"We are part of the international anti-Daesh [alternate name for the Islamic State terrorist group, outlawed in Russia] coalition, we support the fight against Daesh… So we want to coordinate our efforts, our military will be in close contact with the Americans, with the Russians and other coalition partners in Syria to obviously avoid any kind of confrontation. We have the conflict [prevention] mechanism in place that will be implemented," Kalin said.

Turkey will take all measures to eliminate the terrorist threat on its border, he added.

Turkey Refuses to Accept 'Fait Accompli' in Syria
Russia, along with Turkey and Iran, is one of the guarantor states of the Syrian ceasefire. Moscow has also been assisting Damascus by providing humanitarian aid to the residents of the crisis-torn country.

Meanwhile, the US-led coalition of more than 70 members is conducting military operations against the terror groups in Syria and Iraq. The coalition's strikes in Iraq are conducted in cooperation with Iraqi officials, but those in Syria are not authorized by the government of President Bashar Assad or the United Nations Security Council.

000000
Popular comments
The US-led coalition of more than 70 members is conducting military operations against the terror groups in Syria and Iraq. From these 69 are servants of the USA power, just servitors of the patron.