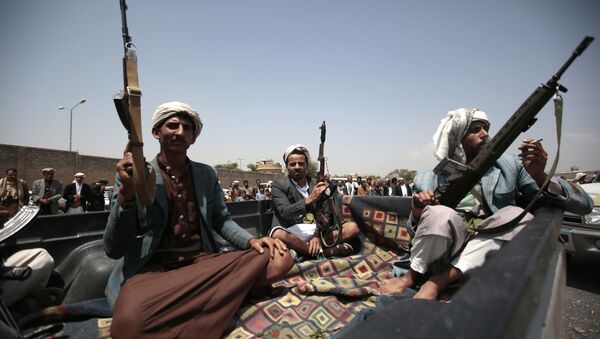 MOSCOW (Sputnik) - Iranian Foreign Minister Mohammad Javad Zarif has once again refuted allegations that Iran provides weapons to the Houthi movement in Yemen to support its struggle against the government.

At the same time, Zarif stressed that the Saudi-led coalition's bombing of Yemeni people was an obvious fact that needed no extra evidence.

Saudi Arabia is interested in increasing tensions in the region, and the examples of a blockade of Qatar and the military operation in Yemen prove that the minister stressed.

Yemen's Houthis Ready for Broader Ceasefire if 'Saudi-Led Coalition Wants Peace'
Yemen has been engulfed in an armed conflict between the government forces led by President Abd Rabbuh Mansour Hadi and the Houthi rebels for several years. The Saudi-led coalition has been carrying out airstrikes against the Houthis at Hadi's request since March 2015.

The fighting has recently intensified near the Houthis-controlled city of Hodeida, through which the rebels receive humanitarian and commercial cargoes. The Yemeni government, in turn, claims that the port city is receiving weapons from Iran.

On Thursday, the UN-mediated discussions on Yemen in Sweden between the warring sides resulted in an agreement to cease hostilities and withdraw forces in Hodeida. The parties agreed to create a UN-chaired monitoring committee in addition to establishing humanitarian corridors to the city of Taiz. The sides also agreed to exchange more than 4,000 war prisoners in late January 2019.

Human Rights in the Islamic Republic

The Iranian foreign minister stressed that Iranian citizens were on whom the state relied for the country's defence, prosperity, economic development and scientific achievements.

"We build our own weapons, these are the people who are building those weapons… So if it is a moral obligation for someone to observe human rights, for us it is a matter of national security. We make mistakes, people commit excesses, but that does not mean that others are in position to give us lectures about human rights," Zarif stressed.

Iranian 'Propaganda' Whistleblowers Do Not Have Their Facts Straight - Journos
Earlier in the week, Iran has once again become a target of criticism by media and rights organizations over the death of Vahid Sayadi Nasiri, a jailed Iranian activist who was on a hunger strike against conditions of his imprisonment and the absence of legal assistance. The prosecutor-general of the city of Qom, where the activist was jailed, however, insisted that the deceased was suffering from liver malfunction and died at hospital.
Newsfeed
0
Access to the chat has been blocked for violating the rules . You will be able to participate again through:∞. If you do not agree with the blocking, please use the feedback form
The discussion is closed. You can participate in the discussion within 24 hours after the publication of the article.
To participate in the discussion
log in or register
loader
Chats
Заголовок открываемого материала