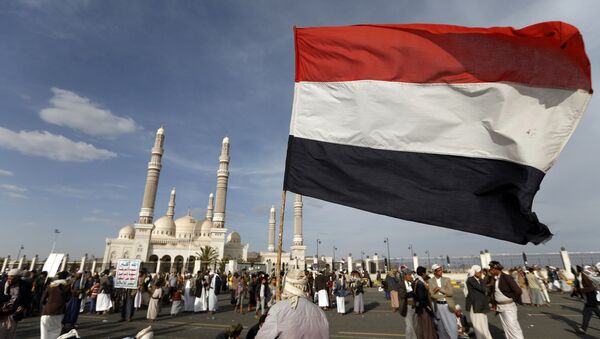 MOSCOW (Sputnik) - A special committee, comprised of the Yemeni government, Houthi movement, and the United Nations representatives, will be created to control the withdrawal of Houthi militants and government troops from the Yemeni port city of Al Hodeidah, Russian Ambassador to Yemen Vladimir Dedushkin told Sputnik on Friday.

"A joint committee of the two [conflicting] sides will be created to control the withdrawal of these forces, and this committee will be set up with the participation of UN representatives and the UN military", Dedushkin said.

US Senate Advances Resolution to Pull Support From Saudi Arabia in Yemen
Dwelling on the results of the one-week UN-mediated talks on Yemen crisis settlement in Sweden, the diplomat said that the withdrawal of troops from the port city envisaged the creation of some 0.6 mile-wide buffer zone in the first week, with the full withdrawal slated to finalize in 45 days.

The sides to the Yemeni conflict also agreed to exchange over 4,000 war prisoners in late January 2019, which will finally settle this issue, he added.

New Round of Negotiations

According to the envoy, the new round of Yemen talks, scheduled for late January 2019, may be held in Kuwait.

All of them, including me, are currently temporarily working in Saudi Arabia… The 'quintet' has held multiple talks with all the sides, it has held regular meetings with UN Special Envoy for Yemen Martin Griffiths and his aides. Our goal was to bring the sides' positions closer… I think that we'll continue pursuing this policy at the next round of talks, which is, by hearsay, planned to take place in Kuwait around late January," Dedushkin said.

UN Envoy: De-Escalation in Yemen Could Be Prerequisite for Peace Talks' Success
The one-week UN-mediated talks on Yemen crisis settlement finished on Thursday. The sides agreed on a governorate-wide ceasefire and withdrawal of forces in Al Hudaydah, the establishment of a UN-chaired committee to monitor the process, a prisoner exchange, and humanitarian corridors to the city of Taiz.

Tensions During the Talks

The diplomat also stated that the envoys to Yemen from five permanent UN Security Council members were acting "like an ambulance" during the consultations in Sweden.

"The five [ambassadors] held numerous meetings with all the parties to the conflict and regularly met with UN Special Envoy for Yemen Martin Griffiths and his assistants. Our task was to bring the positions of the sides closer. When the UN special envoy had difficulties on any particular issue, the group of five, like an ambulance, immediately joined the work and urged one or the other side to make the right decision", Dedushkin said.

Yemeni Gov't, Houthis Sign Agreement on Exchange of Detainees - UN Envoy
He noted that the talks were very difficult, with the UN Security Council members' ambassadors staying up during the last two nights.

Dedushkin also stressed that Russia was playing "an extremely important role" as a mediator due to its good relations with both the legitimate government and the Houthi movement. Russia was also "probably the only party" who had trusting relations with the General People's Congress party, he added.

"It really helped. This was noted not only by the UN special envoy, but also by our Western colleagues, who also thanked Russia for its real contribution to the effectiveness of the event. I think that at the next stage of negotiations, which is said to take place in Kuwait in late January, this practice will be continued", he said, thanking Sweden for hosting the talks and providing assistance to its participants.