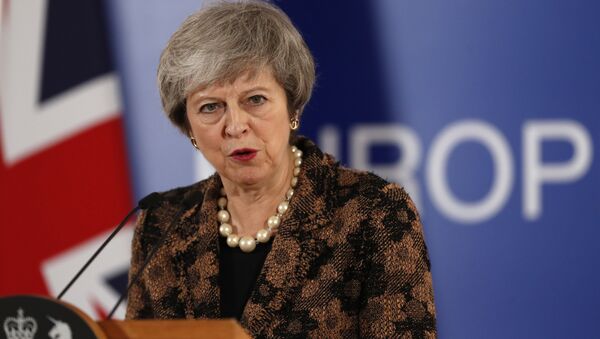 © AP Photo / Alastair Grant
Subscribe
Further clarification and discussion on the Brexit withdrawal deal is possible, UK PM Theresa May told the media during a press conference in Brussels on Friday, on the second day of the European Council summit.

"It is in the interest if the EU and the UK to get this deal over the line," she told the journalists.

The PM said she got further reassurances from the EU leaders, they will look into the deal on the table.

The UK government is making no-deal preparations, Theresa May said, when asked whether Britain is ready to trade under the WTO rules, following March 29, 2019.

"I believe it is better to leave with a deal and a good deal," the PM said.

The PM appeared to confront the President of the European Commission, Jean-Claude Juncker on Friday, hours after he accused her of being "nebulous and imprecise".

"I had a robust discussion with Jean-Claude Juncker," Theresa May said in regards to the chat, which was caught on an official video feed.

This doesn't exactly look like an exchange of pleasantries between Theresa May and Jean-Claude Juncker as the Brexit summit gets underway. #EUCO pic.twitter.com/l0r4NwDj8h

"That's the sort of discussion you are able to have when you've developed a working relationship and you work well together. What came out of that was his clarity that actually, when he used this particular phrase, he was talking about a general level of debate," said during the press conference.

EU leaders have confirmed during the December 13-14 Summit that the bloc stands by the current Brexit withdrawal agreement and "intends to proceed with its ratification."

"It is not open for renegotiation," the EU leaders said.

However, Mrs. May's spokesperson said on Friday that Downing Street was confident it can get the assurances it needs from the European Union over Brexit.

"This is the start of the process of finding a solution that parliament want and there's obviously more work to do. There is a shared determination to find a solution and we will keep working on that. We are confident that the deal is the right thing for the country and we can get the solutions that we need."