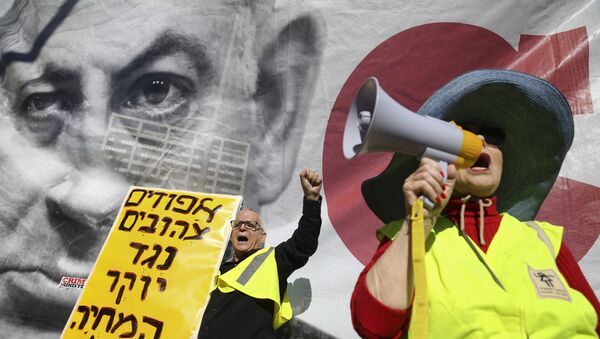 The secular centrist Yesh Atid party said in a press release that an estimated 600 people in Tel Aviv took part in the "yellow vests" protest, named so after a French grassroots movement.

"The society cannot ignore a wave of rising prices of everything – from electricity to food. It is the fault of the prime minister and the finance minister. We will fight against rising costs with all we’ve got," the party said.

​The demonstration in Tel Aviv led police to block briefly several streets. The protest action turned violent at one point, causing opposition lawmakers to retreat so as not to be associated with unrest, according to their statement.

​The "yellow vests" protests started in France after anger at fuel price hikes brought luminescent jacket-wearing motorists on to the streets. Over the past four weeks, it morphed into a wider protest movement and was copied by people in other countries.

#Israel: Inspired by the #French #GiletsJaunes movement, a wave of protests of the #YellowVests, arrived in Israel today. The people are demonstrating for the cost of living in front of the Azrieli Mall in #TelAviv this Friday #Resistance!pic.twitter.com/q9AotLIptB