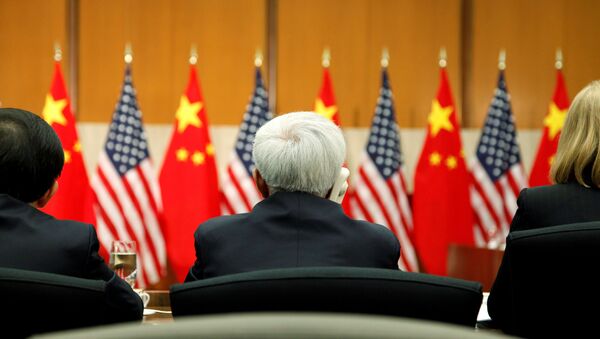 The recent positive developments in resolving the trade dispute between Washington and Beijing that were achieved at the last G20 summit have recently been put at risk by the arrest of Huawei's chief financial officer in Canada on a US warrant. Sputnik has asked two economic experts about the prospects of the US-China trade war in this context.

Claude Barfield, a former consultant to the office of the US Trade Representative and researcher on international trade, believes that the US won't be able to solve the trade deficit problem by imposing tariffs. The researcher insisted that the trade balance is more dependent on the internal economic policy, rather than trade. If this policy isn't fixed, then the trade deficit with China will just "migrate" to trade with another country, according to the researcher.

"If you don't save enough to cover your investments and consumption [which] we haven't done for 40 years, then someone else will do it for you. So if we change the bilateral trade deficit with China it would just go somewhere else", Barfield said.

On Economic Effects of Trade Deficit

Kevin Dowd, British professor of finance and economics at Durham University Business School, argued that one should practically ignore the trade deficit as an irrelevant indicator.

"Trade deficits or surpluses merely reflect flows of goods versus assets and governments shouldn't meddle with them. Frankly, it would help if people didn't report them either", he said.

When commenting on possible consequences of the trade war for the US and China, the experts agreed that both states would suffer from it more or less equally. Barfield said that Trump's tariffs would add to the economic challenges standing before Chinese President Xi Jing Ping, such as slowing growth and exports, but noted that they would also affect many economic sectors, not only in China.

"They both have a huge amount to lose. A trade war is bad for everyone", Kevin Dowd added.

Both experts also agreed that it's hard to establish a reliable connection between a large trade deficit and unemployment. Barfield brought up statistics showing that the US trade deficit rose between the 1980s and the first years of the 2000s, with unemployment figures reaching massive heights. But at the same time, some 20 million jobs were created under the Clinton administration despite the rising trade deficit in 1990s.

Dowd pointed out that a trade deficit could also mean that foreigners are investing in the country's economy, thus creating new jobs. He summed up that it would be hard to assess the overall impact of a trade deficit on jobs.

Outcome of the US-China Trade War

Speaking on the possible outcome of the trade war between Washington and Beijing, Barfield admitted that it's hard to predict what the result might be. He added that the trade war's outcome will mostly depend on the political will and economic resources of the participants involved in the conflict. The researcher still concluded that neither of the sides would be a winner in this confrontation.

His opinion was echoed by Dowd, who said that the only outcome of the US-China trade war would be great damage to both countries' economies, concluding that "no side wins in a trade war". He noted that the best course of action for Beijing and Washington would be to "de-escalate and refuse to be provoked", adding that neither side is currently doing this.

"The only way to 'fix' the problem is for both sides to abandon the tariff war and that doesn't seem likely", he said.

How Will the Arrest of the Huawei Executive Affect Trade Dispute Negotiations?

Barfield said that the recent arrest of Huawei's CFO had led to new disagreements between China and the US, but hadn't curbed the success achieved at the G20 summit. He added that it looked like the US administration had been monitoring the CFO's movements for months prior to the arrest, waiting for her to go to a country that has an extradition agreement with the US.

Dowd suggested that Washington could have had "good grounds" for arresting the Huawei executive, but noted that a case of "bad management" could not be excluded. The researcher also said that the arrest is likely to affect bilateral relations between the US and China, as the latter "will certainly retaliate", further increasing tensions.

"This could all have been avoided had the US administration had more sense on the issue", Dowd added.

Huawei CFO Meng Wanzhou was arrested in Canada on 1 December on a warrant from the US, accusing her of facilitating evasion of American sanctions against Iran. A Canadian judge has set the bail for Meng Wanzhou at $10 million.

The arrest came after a much anticipated turn in the trade dispute between China and the US, who have been exchanging mutual tariffs on goods for over half a year, with billions of dollars' worth of goods being affected. Trump alleged that he could "intervene" in the arrest of Wanzhou if it starts to impact the process of reaching a trade deal with Beijing.