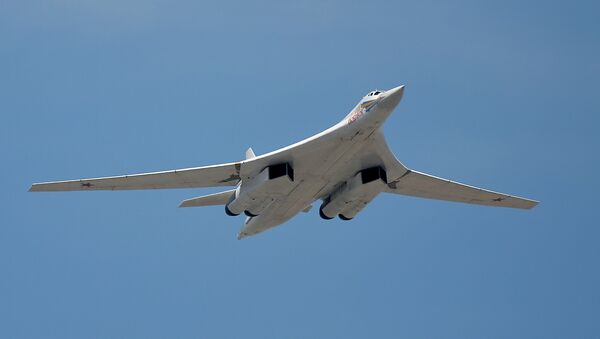 MEXICO CITY (Sputnik) - Venezuelan President Nicolas Maduro has said foreign military aircraft will continue arriving in the South American country over the coming months amid a visit by Russian planes to Venezuela.

On Monday, two Russian Tu-160 strategic bombers, an An-124 military transport aircraft, and an Il-62 plane landed in Venezuela. The Russian planes conducted interoperability drills with the Venezuelan Air Force this week.

"The planes arrive and they will arrive in the coming months", Maduro told a press conference that was broadcast on his Twitter page.

The Venezuelan president also commented on the criticism over the visit of the Russian aircraft by Colombian President Ivan Duque, who suggested that the move was unfriendly. Maduro argued that "having mercenary camps inside a country, like those in Colombia, is unfriendly".

Meanwhile, the Organisation of American States (OAS) has expressed concern over the presence of Russian military aircraft in Venezuela.

"The General Secretariat of the Organisation of American States (OAS) takes note with the greatest concern of the news coming from Venezuela about the possibility that aircraft capable of using nuclear weapons from Russia are in its territory", the OAS said in a statement.

The alliance suggested that the presence of Russian military aircraft in Venezuela was a violation of the South American country’s law because it had not been approved by its lawmakers.

Moreover, OAS claimed that the arrival of the Russian aircraft had violated international law because Venezuela was a party to the Treaty for the Prohibition of Nuclear Weapons in Latin America and the Caribbean, which banned the receipt, storage, or possession of nuclear weapons on its territory.

The Russian military aircraft's arrival in Venezuela has also been criticised by US Secretary of State Mike Pompeo who referred to Moscow and Caracas as "two corrupt governments squandering public funds, and squelching liberty and freedom while their people suffer".

The Russian Foreign Ministry has commented on Pompeo's remarks by calling them unacceptable and absolutely unprofessional.