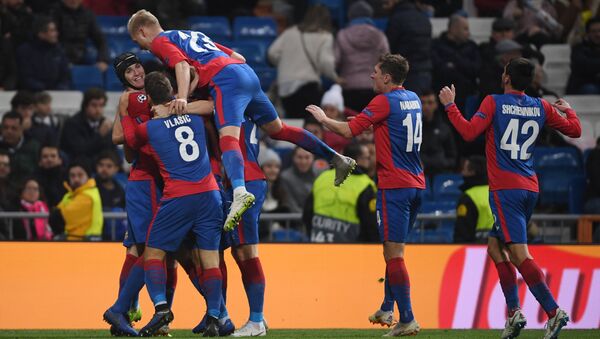 The Russian underdogs won their home UCL group stage match against the Spanish giants back in October, but the latest victory over Real Madrid, a 3-0 thrashing at the Bernabeu, was nevertheless still a shock result.

CSKA Moscow enjoyed yet another triumph over La Liga heavyweights Real Madrid in the UEFA Champions League (UCL) group stage – this time a 3-0 thrashing away from home.

After failing to capitalize on several chances in the early stages of the game, Los Blancos conceded two goals in quick session before half time, and Icelandic midfielder Arnór Sigurðsson sealed the win, scoring CSKA’s third goal in the 73rd minute.

The result makes the Moscow-based club, who currently sit third in the Russian Premier League on 30 points, the first team to beat Real both home and away in the Champions League group stage.

Wednesday’s thrashing is also Real Madrid’s biggest ever home defeat in a European competition and their first group stage loss since 2009.

Football fanatics reacted to the shock result on social media, with some hailing CSKA’s performance, while others suggested Real’s woes are largely due to Cristiano Ronaldo’s absence.

This picture speaks for itself… 😂😂😂 pic.twitter.com/4PHQ0O2Bla

I love the russian spirit

Just shows how influential Ronaldo was

Despite doing the double over Real, CSKA Moscow crashed out of the Champions League, finishing bottom of Group G on 7 points, level with Czech size Viktoria Plzen.

Real Madrid topped the group, while Serie A side Roma finished in second, progressing to the tournament’s knockout stage.