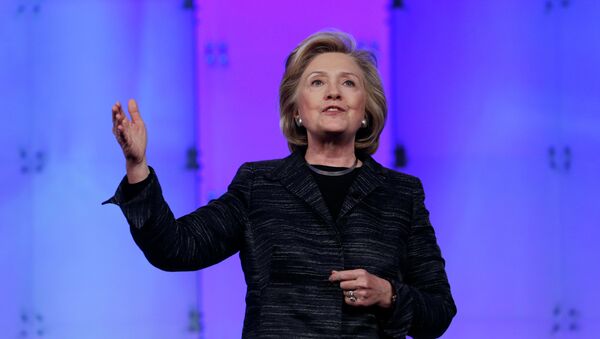 While Democrats are preparing to take the reins in the House of Representatives, House Republicans have kicked off a hearing into the Clinton Foundation. While three whistle-blowers are about to deliver their testimonies about the charity's alleged fraud, US Attorney John Huber, tasked with looking into the Clintons' case, refused to appear.

Three whistle-blowers are expected to present "explosive" evidence on allegedly fraudulent activities by the Clinton Foundation during a 13 December hearing before the Subcommittee on Government Operations of the House Committee on Oversight and Government Reform.

The purpose of the event is "to discuss the management of 501(c)(3) nonprofit organizations and how the designation impacts the programs and activities a nonprofit is allowed to conduct".

Previously, US Rep. Mark Meadows, R-NC, the chairman of the Oversight's subcommittee, announced that US Attorney John Huber, who was tasked by the ex-attorney general to take an in-depth look into the Clinton Foundation and ex-Secretary of State Hillary Clinton's "emailgate" case, would provide an update on his inquiry on 5 December.

'Judgement Day' Nears: Analyst on Why Clinton May Finally End Up Behind Bars
The hearing was postponed to 13 December, apparently due to George H.W. Bush's funeral. However, eventually, Justice Department spokeswoman Kerri Kupic announced that Huber would not testify at all.

Speaking to Sputnik on 8 December, Charles Ortel, a Wall Street analyst who has been investigating the Clinton Foundation's alleged fraud for the past few years, noted that "Huber was an Obama nominee, so some question whether he ever intended to explore a real investigation, as Sessions asked him to do earlier this year".

Although Huber will not appear before the subcommittee, the three whistle-blowers — Associate Professor of Law Phillip Hackney, Managing Partner of DM Income Advisors Lawrence W. Doyle, John F. Moynihan, principal at JFM and Associates — and Judicial Watch President Tom Fitton most likely will.

#LockThemUp: Trump Steps In to Bring Comey, the Clintons to Justice – Analyst
As John Solomon revealed in his op-ed for The Hill, one of the whistle-blowers secretly submitted 6,000 pages of documents to the IRS and FBI more than a year ago.

A private firm, MDA Analytics LLC, operated by "accomplished ex-federal criminal investigators", assembled the documents and alleged that the Clinton Foundation had been "engaged in illegal activities and may be liable for millions of dollars in delinquent taxes and penalties".

In his interview with Fox News on 10 December, Meadows disclosed that all three whistle-blowers had "quite explosive" allegations against the Clintons.

JW: Clinton to Answer Emailgate Questions in Writing, Under Oath

In addition, Tom Fitton, who has long been digging into the alleged wrongdoings by the Clintons, promised to unveil "the Clinton Foundation 'pay to play' corruption issues" during the upcoming hearing.

Ready for Congress! — Testifying on the Hill for @JudicialWatch tomorrow on the Clinton Foundation "pay to play" corruption issues. Mr. Huber won't be there so it is once again up to JW, who helped break open the scandal. https://t.co/c7sX5Cz3LP pic.twitter.com/wxmkI5BGOl

Additionally, Judicial Watch is forcing Hillary Clinton to answer the watchdog's questions regarding her government business via unsecured email servers and unprotected devices during her tenure as a secretary of state under oath.

"Court rules Hillary Clinton must answer more email questions in writing, under oath — including key q's about the setting up of her email system", Fitton tweeted on 11 December.

Court rules Hillary Clinton must answer more email questions in writing, under oath — including key q's about the setting up of her email system. The answers are due next Monday! Great work by JW attorney Michael Bekesha! https://t.co/VBKkm3YJES … pic.twitter.com/KNPtVlcATN

​DOJ Wants to Sweep FBI's Raid on Whistle-blower Under Rug

It appears that targeting the Clintons is fraught with risk: earlier, Dennis Nathan Cain, a former FBI contractor who delivered documents concerning the Clinton Foundation and Uranium One deal to a government watchdog, was raided by 16 FBI agents on 19 November for 6 hours despite that he told them he was a recognized whistle-blower.

Richard Pollock, an investigative journalist with The Daily Caller, who broke the news, reported on 10 December that the Department of Justice had requested that the justification for the FBI raid remain secret. Furthermore, the case remained largely neglected by US left-leaning MSM.

I am grateful Don, Jr has recognized the injustice of the FBI's raid and the DOJ's refusal to come clean about this terrible raid on a patriotic American who saw wrongdoing about the Clintons and tried to do something about it. My coverage of this will continue. Thanks DT,j! https://t.co/E0bJJ24opP

​The views and opinions expressed by the contributor do not necessarily reflect those of Sputnik.