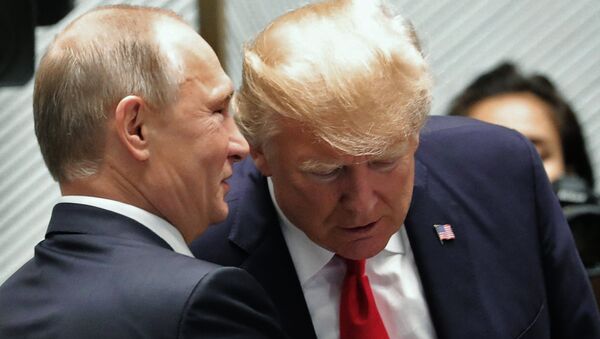 Following the overwhelming backlash over the first full-fledged summit with Russian President Vladimir Putin in Helsinki in July, Donald Trump was said to have been forced to backtrack on some of his comments.

The CIA plunged into “panic mode” in July when President Donald Trump somewhat hinted that Vladimir Putin’s “strong and powerful” denial of meddling in the 2016 election outshined the US intelligence assessment, The Washington Post reported, citing an unnamed intelligence official.

“There was this gasp” among those watching at the CIA, the insider claimed, adding “You literally had people in panic mode watching it at Langley. On all floors. Just shock”.

The CIA and the White House are yet to comment on the report.

Standing next to Putin in Helsinki, Trump said that while he had “great confidence” in the US intelligence community, he didn’t see any reason why Russia would have interfered in the election process.

“He [Putin] just said it’s not Russia. I don’t see any reason why it would be, but I really do want to see the server. I have great confidence in my intelligence people, but I will tell you that President Putin was extremely strong and powerful in his denial today”, he said.

But on the very next day, Trump made a U-turn in his support of Putin’s denial of Russian meddling in the US election, claiming that he had misspoken during the joint presser and accepted US intelligence conclusions that Moscow had purportedly sought to influence the outcome of the vote.

“The sentence should have been: I don’t see any reason why I wouldn’t – or why it wouldn’t be Russia”, he clarified at the time, claiming he had used a very confusing “double negative”.

Trump: Mueller Probe a 'Witch Hunt,' Manafort Verdict 'A Very Sad Thing'
The Trump administration has consistently denied any collusion with the Kremlin during the election campaign, with POTUS eloquently dismissing the allegations as a “witch hunt”.

Moscow has also denounced the accusations of its interference in the 2016 vote as “baseless”, stressing that no evidence has been provided to substantiate the claims.

During the joint presser in Helsinki, President Putin reiterated that Russia “has never interfered and is not going to meddle in US internal affairs, including in the election process”.