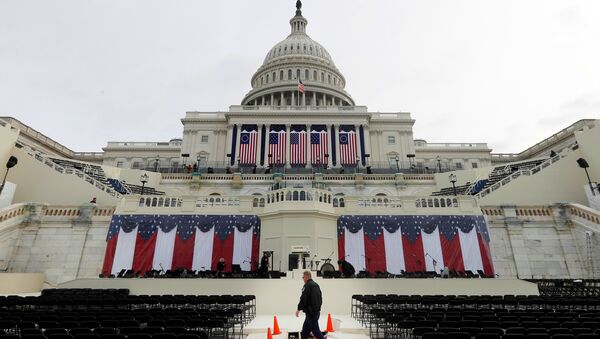 Federal investigators are probing US President Donald Trump’s inaugural committee to find out if money donated to it or spent by it was used for corrupt purposes, the Wall Street Journal revealed Thursday.

The committee for funding the celebration expenses associated with Trump's inauguration to the presidency in January 2017 raised a record amount of money: $107 million, more than twice what his predecessor, Barack Obama, raised in 2008, which was itself a record. That money, raised from donations, was spent paying for reservations, caterers, entertainment, and a host of other expenses.

The Manhattan US attorney's office is now investigating whether or not people who made those donations received policy concessions or influence over official administration positions and is also probing the committee's finances to find out if it spent money on something other than the inauguration. Both circumstances would be violations of federal law.

According to the committee's mandatory tax filing, it spent $77 million on conferences, conventions and meetings; another $4 million on ticketing; $9 million on travel; and $4.5 million on salaries, wages and other expenses. Committee head Thomas Barrack Jr. has said that an external audit of the committee's finances was performed, according to the WSJ, but that audit has not been made available. It's not clear at this time which expenses are under scrutiny by federal prosecutors, but the paper did note that Barrack is not under investigation.

The biggest recipient of committee money was event planner Stephanie Winston Wolkoff, an unpaid campaign adviser and personal friend of Melania Trump's who runs the firm WIS Media Partners. Wolkoff's firm received $25.8 million for its services, with Wolkoff retaining $1.6 million of that sum for herself, the New York Times reported.

The investigation may have been spurred in part by the FBI's raid on former Trump lawyer Michael Cohen's home, office and hotel room in April 2018, during which it seized materials that included a recording of a conversation between he and Wolkoff in which the latter expressed concerns about how the inaugural committee was spending its money.

Another subject of the probe will be possible foreign donations to the fund, which would also be violations of federal law. An August guilty plea by political consultant and lobbyist Thomas Patten revealed that he laundered $57,000 via an unnamed "straw purchaser" in the US so that an unnamed "prominent Ukraine oligarch" could get four tickets to the inauguration, according to Patten's Statement of the Offense.

Some of the potential corruption charges being probed are donations made by Tennessee developer Franklin L. Haney to the committee. Haney, who donated $1 million to the fund, later retained Cohen's services while he was also in the employ of Trump in order to help Haney obtain a $5 billion loan from the US Department of Energy. That money would be used to buy the unfinished Belafonte Nuclear Power Plant from the Tennessee Valley Authority, according to the Chattanooga Times Free Press. That deal has not yet been finalized.

The WSJ noted that federal prosecutors have sought documents related to Haney's donation.

However, they apparently haven't asked the inaugural committee for records, nor has the committee been contacted by prosecutors, with a spokesperson telling the paper, "We are not aware of any evidence the investigation the Journal is reporting actually exists."