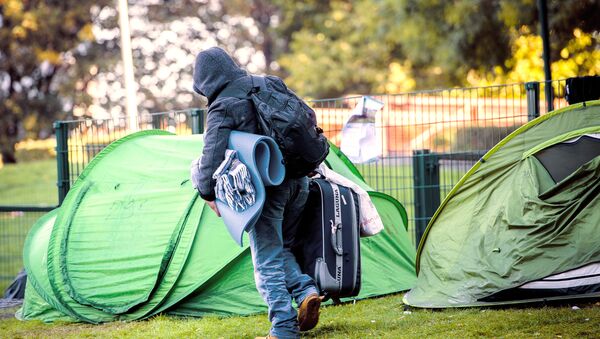 On Monday, two-day Intergovernmental Conference to Adopt the Global Compact for Safe, Orderly and Regular Migration started in the Moroccan city of Marrakesh. The UN Global Compact for Migration represents the international community's attempt to establish a common global approach to all aspects of international migration. The pact comprises 23 objectives for better managing migration at local, national, regional, and global levels.

After Sunday's meeting with Michel, King Philippe of Belgium approved the resignation of three ministers and two state secretaries from the N-VA, who left the ruling coalition because of disagreements over the UN migration accord.

The decision came after the party said last week that it categorically rejected the UN migration pact. The party initially stressed that it would neither back the initiative nor leave the coalition government, appealing to Michel to refrain from approving the compact.

Michel, in turn, asked left-wing parties in the parliament to help him secure majority, so that he could sign the migration pact in Marrakesh. As a result, he garnered the support from these parties, while the N-VA had to leave the coalition.

The minority government, which emerged as a result of the coalition breakdown, will only last for some five months, until the general election set for May 26, 2019.

"That's it, it's done. Belgium has approved the migration pact this Monday. I made the choice to put my country on the right side of history," Michel said at the conference after signing the migration deal.

The Flemish nationalists of the N-VA, ousted by Michel’s decision, remain the dominant force in the country.

They are considered by the left and centre-left parties "populists," while another Flemish party — the right-wing Vlaams Belang (VB) — is being regarded by the main parties as "extreme."

The VB party has violently campaigned against the migration pact, urging its Flemish counterparts from the N-VA to take a tougher position on the issue.

One More EU Country Votes Against UN Global Migration Pact
Prime Minister Michel of the conservative-liberal Reformist Movement (MR) has turned to be an ally of the leftists, especially the Ecologists and the Humanist Democratic Centre (CDH), by taking a "pro-migrant" attitude, which is not supported by his own voters.

The N-VA fears — just like many countries in the world, the latest to be named is Chile — that the document will increase migration from Africa, giving more rights and a better protection to undocumented migrants rather than the local population.

The fear is that the UN pact will become "morally" compulsory because the European Court of Human Rights in Strasbourg will use the document to promote migration and systematically take the side of migrants.

How the Coalition Row Will Affect Electorate Preferences

According to Tatiana Hachimi, a French-speaking N-VA candidate in Brussels in last month’s local elections, the prime minister’s stance might backfire on his own party in the next general elections, as voters are feeling betrayed by the party’s drift to the left.

"I really think Prime Minister Michel has been arrogant and unconstitutional in his handling of the crisis. Constitutionally, he could not go to Marrakesh after ousting the NVA ministers, with a hastily assembled majority in parliament. It will come like a boomerang, right in his face. Many French-speaking voters feel betrayed by the MR, who has become a copy of the Green parties for their support of inefficient ‘renewable energy sources,’ their decision to stop nuclear energy and their will to help migrants, in place of shutting down the borders," Hachimi told Sputnik.

Hachimi, however, added that the situation could also take an unexpected turn, as both the N-VA and the MR party would be seeking to emerge victorious from the crisis.

"But paradoxically, the majority parties may not have done so badly in the adventure. The N-VA will be able to focus on reclaiming voters lost in the provincial and local ballot to the hard right of the Vlaams Belang, and the MR of the Prime Minister can now silence those who blame him for being always in tow of the N-VA. The two other Flemish parties in the coalition may give the impression that they are able to free themselves from the nationalist N-VA and rule without them," she pointed out.

Philosopher and political observer Drieu Godefridi, the founder of the Hayek Institute, in turn, said that the N-VA was very likely to use the situation for its future election campaign and take a tougher stance on migration.

"The Flemish N-VA is from now on the campaign trail, and might stop the disaffection of the anti-migrant voters, that are oozing out to the competing VB on the right of the political spectrum. As for the French-speaking side, all parties strangely declare themselves on the left side, in favour of the Pact: the socialists of the PS [Socialist Party] and communists of the PTB [Workers' Party of Belgium], as well as the Greens and the centre-left CDH [Humanist Democratic Centre], and now the MR, which was supposed to be centre-right!" Godefridi told Sputnik.

Godefridi also suggested that the MR could face an internal rebellion if the polls showed further rating decline.

"These voters in Brussels and the French-speaking south of the country (Wallonia) would move to the Parti Populaire [People's Party, PP] of Mischael Modrikamen. The problem of the PP is that it is the subject of a scandalous media campaign to silence the voice of the PP, as the conventional media refuse to give the word to any of its spokespersons because the press wrongly considers the party ‘extreme right,’" he argued.

German Bundestag Votes to Join UN Global Migration Pact - Reports
The remaining months in power may indeed be quite difficult for Michel and his minority government, with the relentless migration issue, heavy taxation and the costs involved with the climate issues, amid the recent "yellow vest" protests in the country.

The only French-speaking member of parliament who voted against the UN migration pact, Aldo Carcaci of the PP party, told Sputnik that his party "will clearly show the citizens in the coming election campaign that PM Charles Michel has suddenly betrayed them, by going to Marrakesh, to defend an unacceptable text, that is opposed – I am sure – by 70 to 80% of the Belgian population."

According to the lawmaker, "Belgians are fed up with illegal immigration" and open-door migration polices.

"[It] will mean a spectacular backlash at the coming elections. We are determined to put migration at the top of the agenda. This stupid lax attitude has lasted long enough. The cost of migration to the taxpayer is a terrible drain on the state finance, more than 8 billion EUR/year," Carcaci said.

Meanwhile, the right-wing VB party is stepping up its criticism of the cabinet’s migration policies.

"Under this government, 500,000 new foreigners were added to all those roaming Belgium, legally or illegally, since nobody is expelled, and 105,000 ‘new Belgians’ were created. So, this was already a Marrakesh coalition!" Tom Van Grieken, the party leader, told Sputnik.

According to the politician, the ruling coalition is acting highly "irresponsibly."

"The VLD [Open Flemish Liberals and Democrats] and CD&V — with the support of the left and the entire Walloon political establishment — want to push through a pact that a large majority of Flemish people refuse. Instead of being occupied with 'the problems of the people', they prefer to be fanatical in their ideological infatuation behind a pact that undermines our society," he argued.

Grieken also slammed his Flemish counterparts, the N-VA party, for being "too late" with the opposition to the pact.

"The N-VA is also responsible of being too weak. The N-VA now opts for the flight ahead after having mismanaged the 'Marrakesh dossier' for two years. The numerous occasions to put the pact in the trash can were not taken advantage of. Theo Francken [Belgian Secretary of State for Asylum and Migration form the N-VA] cabinet played a leading role in this cock-up. They now pull the plug, but too late. Their negligence will be paid cash by the country," he went on.

Bulgaria Won't Join UN Migration Pact
According to Grieke, the N-VA party is just "trying to change direction only for electoral strategy reasons."

He also pledged that his party "wants the next elections to be a referendum on the immigration issue," and urged the N-VA party "to finally talk to us, to form a new majority."

In the meantime, the UN migration pact is far from being a global approach for the world, with Austria, Australia, Israel, the Czech Republic, Bulgaria, Hungary, Poland, Slovakia, Lithuania, and now Chile having refused to sign the agreement.

000000
Popular comments
Conservative liberal reformist?! Multiple personality disorder? In EU left is anti-patriotic, left can't be patriotic because everything what is patriotic is labeled extreme right. Extremist is one who does not serves foreigner. Most of political spectrum can be labeled serves foreigner.

FBulovic
11 December 2018, 10:42 GMT
000000
The EU nations were lied to. Originally they were told that the formation of the EU was for economic reasons to help the individual nations’ economies. But the main reason for its formation was political. Instead of each nations’ sovereignty being valid, like they were promised, they were ultimately forced into being under the control of a central government. This Migration Compact is being forced upon the individual nations of the EU whether they like it or not.