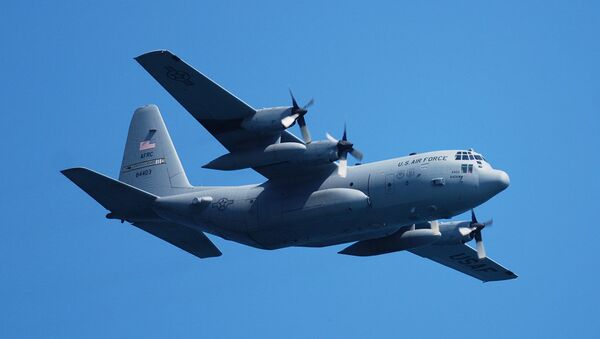 The US Air Force conducted a large drill to simulate an invasion of foreign territory in Nevada over the weekend.

A slew of cargo-carrying C-17 and C-130 aircraft were detected flying in a "conga line" for an exercise called Joint Forcible Entry 18, which took place in the southwest region of the US, The Drive reports. The point of the drill is to rehearse an operation in which air and ground forces cross into foreign territory en masse and set up shop against an armed, world-class adversary.

​Aircraft trackers like CivMilAir provided some snapshots of what kinds of aircraft were flying and what their positions were during the exercise, which was held December 8.

​The drill primarily involved aircraft from Air Mobility Command, according to The Drive, suggesting this was an exercise for the US Air Force's AMC to practice in the event it was called upon for such a task.

​Joint forcible entry exercises are all hands on deck tasks. Personnel and assets from the Marines, Army, Navy, Air Force and Special Operations would all be called upon for one of these types of operations, according to US joint doctrine.

​Last year, the US Air Force's Air Mobility Command conducted a comparable exercise with British, Australian, New Zealander and Canadian forces. One of the US commanders overseeing the drills said at the time that 13 C-17 Globemasters and 19 C-130 Hercules dropped equipment and 377 soldiers into an airfield in Washington state.

"Joint planning and collaboration between the staffs and the commands is imperative," US Army Lt. Col. Ricky Taylor said in a news release at the time.