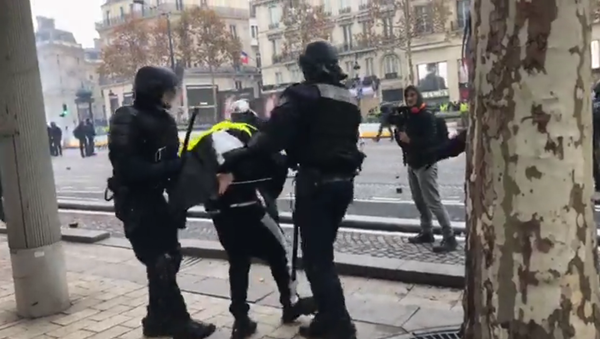 © Sputnik
Subscribe
Over 500 people were detained and more than 200 were arrested on Saturday amid more anti-government 'Yellow Vest' protests in Paris, prompting authorities to brace themselves for more violence. Sputnik discussed the ongoing protests with Joe Quinn, a Paris-based political commentator and author.

Sputnik: What is going on with the protests in Paris right now?

Joe Quinn: The protests are on going, this is the fourth Saturday, Saturday being the main day when people get out on the streets and protest because a lot of people are not working on Saturday and they can come out and protest. But of course these protests are primarily against the French government as is often the case with French protests. But these protests are unusual compared to previous protest over the years in France in that they are not organized by the French trade unions.

They're not a specific sector of the French working population, it's basically ordinary people, old and young, from across the spectrum who are protesting against the French government simply because they do not like the French government, do not like Emmanuel Macron, do not like the policies that he's pursuing and has been pursuing since he became president about a year and a half ago. These protests are also remarkable in the sense that polls suggest that about 84% of the French population supports them, which is a very high number compared to previous protests, [which usually had] 50%-60% support from the population.

So, as to what the French people are actually protesting about and what their issues are, it's a generalized and serious discontent with Macron's government in particular and the policies that he's been pursuing. Of course, the policies that he's been pursuing did not begin with Macron but, unfortunately, Macron is the most ardent and public supporter of them. He is an unabashed supporter of these policies and the policies I'm speaking of essentially are policies that favour big business, big corporations, give tax breaks to big corporations and increase taxes on the general French population.

Sputnik: This all started as a fuel price, a diesel tax protest; it was against the diesel tax which was supposed to counter diesel [use] and climate change and so forth. But why was that particular issue the one that broke the camel's back? And were there other issues? Because now the government has now said we're not going to have that tax next year and people have not gone back home. So I'm wondering what led up to this protest really happening, and why after the government even meeting the primary demand, why are the protest continuing? There must be other reasons they started, I guess.

Joe Quinn: That's the best evidence that obviously these protests are not about the car tax or gas tax, or diesel tax hike. For a start, what the government said, that they were going to suspend or delay, or postpone the tax increase for six months. What do you expect the protesters to say to that? It was only postponed by six months. But as you said, that's obviously one reason why they're not accepting it, but it's much broader than that. It's like I said, it's a general and serious discontent among the French people with what they perceive to be and what they accurately perceive to be serious corruption within the French government and an increasingly out of touch government or a government that's out of touch with the French people.

Sputnik: I'm wondering how much trouble actually is Macron in right now. Do you think that his presidency is under risk? So you see something happening? Will he make it till the end of his term, are there any precedents that would say that there might be serious issues with Macron?

Joe Quinn: Hopefully there aren't really any precedents in modern history where a sitting government in France was forced out of power by public protests. Usually the governments can give in or some kind of a sop is given to the protesters and then they go away. Like I keep saying, we're talking here about an elite around the world, particularly in the Western countries, who are massively out of touch with the population and have entranced themselves in their own corruption and in their own self-belief that they run the world and they can decide, and that they can manipulate the people to do whatever they want them to do. These protests over the past few weeks in France are, thankfully, an example of the French people or some people somewhere around the world saying no to that arrogance, to that arrogance of the elite.

Sputnik: I just wanted to focus more on the politics and what's going on the political scene. Are there any political parties or groups that have aligned themselves with this movement? You said 84%, that sounds like a pretty good electorate that's in support of these movements. I'm just wondering whether there's any French political circles that can profit from the troubles that Mr. Macron is currently facing and the 'Yellow Vest' protest movement?

Joe Quinn: Well, I think given everything that I've said, the one party that would possibly benefit from this movement and from the current climate in France would be the Front National, Marine Le Pen's former party and now her niece's party who leads it; they're the ones who most obviously would benefit from it. Macron, when he was elected a year and a half ago, created this new party En Marche! that came out of nowhere and had massive backing, massive funding. It was a centrist party, right away he set himself as a centrist, because like in many countries in Europe and around the world you have the left and the right-wing party that have been there for ages, but Macron, supposedly, took the centre approach and launched the new party, but now it's fallen flat on its face.

So, effectively there's nowhere left to go for the French electorate, for the French people in terms of where they should give their allegiance, because Macron, supposedly, provided a solution to the decades of left, right, nothing happening, no change between the left and the traditional right parties, but now he has shown himself to be a charlatan as well. So, who's left? The only ones that are left are the far, far left parties, but there's no serious support for the Communist Party, for example, in France, but there is significant support, in the current climate, like I said, for Front National.

Sputnik: Do you think this whole movement is going to actually see a shift to right-wing politics in France?

Joe Quinn: Yes, it is going to increase. It has been increasing, the Front National did better than they have ever done in the last presidential elections. And as a result of Macron's policies he's just going to push more and more people towards parties like the Front National, to the right-wing parties, because, as I said, immigration is a big issue for people and, obviously, that's the one thing that the far-right parties can stick their claim to, which is dealing with the unfettered illegal immigration.

000000
Popular comments
sapper, i am utterly convinced this was a rigged election! You can see distinctive parallels with other rigged elections ala Bush/Russia there is always certain critical pathways that determines the decision to rig an election.

Rasputin002
9 December 2018, 11:52 GMT2
000000
Rasputin002, It WAS rigged. They had Obama's old election team here to spin everything from start to finish and lots of people never got ballot papers and probably quite a few were "lost" too. Saying that quite a few of my friends now regret having actually voted for him!!