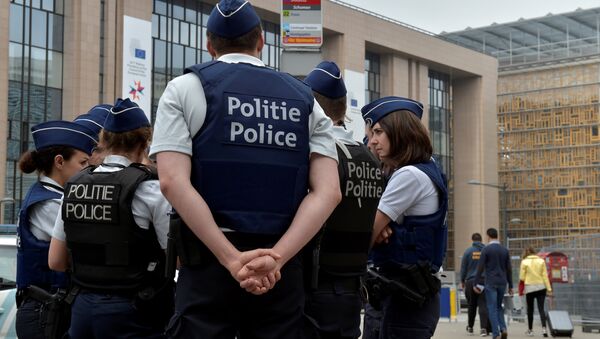 According to a Sputnik correspondent, Brussels police had blocked the passage to certain busy streets in order to prevent groups of protesters from entering. Special units of the Brussels police are traveling across the city in trucks, while police are also patting down all suspicious individuals coming from the city's train stations.

Brussels police on Saturday faced off against about 100 "Yellow Vests" protesters on Rue de la Loi, denying them access to the European Quarter, where the demonstrators intended to hold an unauthorised rally.

Law enforcement officers had already detained about 70 people earlier on suspicion that they intended to join protesters in various areas of the capital, Ilse Van De Keere told reporters.

French Police Labor Union Goes on Strike Ahead of Saturday Yellow Vests Protests
On Saturday, Belgian police prepared a thousand special forces officers to combat riots in Brussels. As Ilse Van de Keere emphasised, police had "tried to contact the organisers of the protest rallies scheduled for Saturday to warn about unauthorised gatherings of people, but could not do this because they did not find anyone responsible for organising the protest".

Many trains this Saturday did not stop at Brussels Central Station; Parc metro station is closed in the centre of the city near government offices. The rest of the city's subway system is still functioning normally.

Ilse Van de Keere told RTBF that local and federal police, as well as firefighters and employees of Brussels' transport services, are cooperating in order to ensure order.