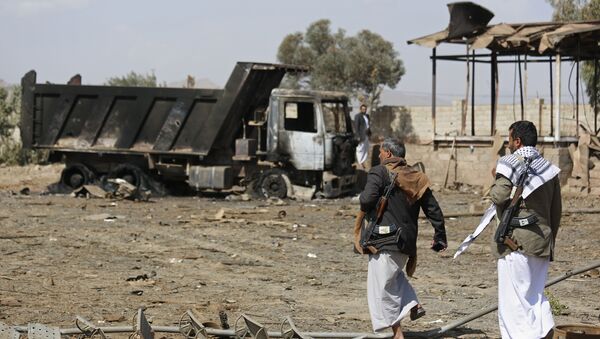 STOCKHOLM (Sputnik) - The Houthi movement is ready to release all its detainees if the Yemeni government agrees to respond in kind, Abdul Majid Hanash, a member of the Houthi delegation to the talks in Sweden, said.

The UN-mediated talks between the Yemeni government and the Houthis started in Stockholm on Thursday. On the same day, UN Special Envoy for Yemen Martin Griffiths announced that the two sides had signed an agreement on prisoner exchange.

"On the issue of detainees, we have done all we can do. We are now ready to release all those we have without conditions if the other side responds. They have said let's agree to release 200 people from each side, but we would like to release all," Abdul Majid Hanash, a member of the Houthi delegation to the talks in Sweden told reporters.

He stressed that the Houthis were ready to provide the lists of all those who had died or were still kept in captivity to the government’s delegation.

"We are even ready to present all the names of those that have died and all that we have [detained], because their parents have the right to know what has happened to them. We have said that we are ready to cooperate in this direction… We want the International [Committee of the] Red Cross to be a mediator," Hanash added.

Abdul Malik Ajri, a member of the Houthi-led Political Bureau, in turn, said that all those whom the Houthis were still holding in captivity were foreigners, mainly the Saudis.

"All of our detainees are Saudi Arabians or foreigners. We don't have any Iranians at all on our land and this shows that there is no Iranian presence in Yemen," Ajri told reporters in Sweden.

The delegate went on saying that the Houthi delegation to the UN-mediated peace talks in Sweden awaits a response from the Yemeni government regarding its proposal to conduct security checks of planes bound for the Sanaa airport in Amman.

"We have given four options for the resolution of the issue regarding Sanaa airport. For example, before the plane lands in Sanaa, we are not against it being checked in the capital of Jordan, Amman. The other side has not yet responded to this," Ajri said.

The comment was made after on Friday, Abdulaziz Jabari, an adviser to the Yemeni president and a member of the government delegation to the peace talks in Sweden, told Sputnik that the government was ready to reopen the airport if the Houthis withdrew from it and the authorities could inspect planes.

The airport has been out of operation for two years due to the ongoing conflict.