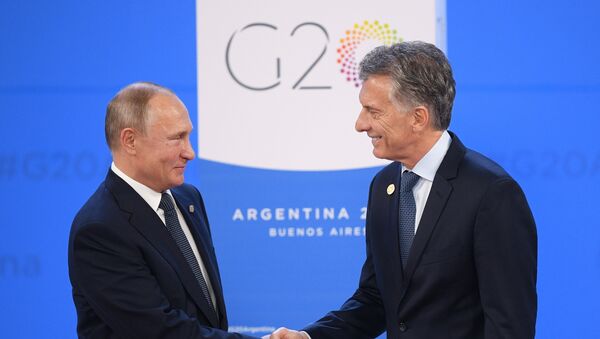 BUENOS AIRES (Sputnik) - Russia is considering using national currencies and barter in deals with Argentina in the defense industry and other sectors, Russian Ambassador to Argentina Dmitry Feoktistov told Sputnik.

"We are considering alternative payment options in defense industry cooperation and in other fields. We are proposing barter deals and [payment] in national currencies to the Argentinians," the ambassador said. Feoktistov cited Argentina’s financial troubles as the reason for such a proposal.

"We are proposing to actively join efforts not only to them [the Argentinians], but to our other partners as well, to switch to payments in national currencies, including peso-ruble. The Argentinians are still thinking," the diplomat said.

Viral
WATCH Putin, Saudi Crown Prince Steal the Show at G20 Summit in Argentina
Feoktistov explained that Argentina traditionally had all its contracts in dollars, so it was not sure about rubles. "But we are converting in many countries, and they will have no problems later, when converting rubles back to dollars," the ambassador said.

Feoktistov said it was regrettable that there were no correspondent accounts between Russian and Argentinian banks. "We would like to see a Russian bank with its office here in Argentina," the diplomat said.

Feoktistov added that potential cooperation projects in multiple sectors could facilitate the opening of a Russian bank in Argentina.

Meanwhile, Russian-Argentinian trade is already estimated to amount to $1 billion or $1.2 billion in 2018 by the end of the year, with 25 percent growth, but there is still potential for further growth, Feoktistov said.

"Our trade is a little less than $1 billion, at about $900 million now, it grew by 25 percent this year, by various estimates, it will be at $1 billion or $1.2 billion by New Year. On the one hand, a 25 percent growth is a positive thing, but it’s all about comparison, and if we look at trade with other leading countries, the situation is completely different… Against that backdrop, it is clear that we have many possibilities to make this amount grow substantially," the ambassador said.

Feoktistov stressed that Russia and Argentina should aim for more than even $2 billion in trade as long-time strategic partners.

Argentina Intends to Use Brexit Impasse to Move to Reclaim Falklands - Minister
"If all this happens, if these and other projects are implemented, then this number will naturally grow significantly. But additional effort has to be made for this," the ambassador said.

Feoktistov also remarked on the need for small and medium Russian businesses to enter the Argentine market. "At the moment, 11 Russian companies are working in Argentina… I think this number is insufficient and does not correspond to the strategic character of our relations," the ambassador said.

The diplomat stressed that Russian businesses had nothing against Argentinians entering the Russian market.

"Our businesses are not afraid of Argentine competitors. On the country, I can confirm myself, I have heard it many times that we would be only glad if the Argentinians and everyone else would actively enter our market. This will be good for the consumer, the prices will be lower," Feoktistov said.

The ambassador also emphasized that there were no barriers for the Argentine businesses in Russia.

Moreover, Moscow is hoping to have some practical results on the planned agreement between the Eurasian Economic Union (EAEU) and South American trade bloc MERCOSUR. Argentine President Mauricio Macri said Saturday that Buenos Aires was planning to "give a new impetus" to the talks when it became the chair of the bloc. The agreement would help facilitate he cooperation between the two regions.

Argentina Slams British Military Exercises, Missile Launches in Falklands
"We are hoping to be able to have some tangible results next year," the ambassador said.

Feoktistov added that the work was ongoing.

"As I understand, we do not have any particular disagreements or notes regarding this document on which the work continues. But some of our EAEU partners do, so this work should go on," the diplomat said.

Dmitry Feoktistov also told Sputnik that the food imports from Argentina to Russia face some issues linked to the long distance, but these problems can be solved.

"For Russia, the problem with Argentina as well as with other countries that are far away, like in Southeastern Asia, is that they are far away. For example, it is clear that it is easier for us to buy dairy in Belarus than import it from Argentina. It will go bad by the time it arrives. The same goes for fruit," the ambassador said.

Feoktistov added that wine from Argentina was of excellent quality, but transportation was an issue.

"If you ship it by bottles, the price will increase significantly. If you pour it into vats, you lose the quality. There are issues like that. In principle, they are all solvable," the diplomat said.

Feoktistov pointed out that the other hemisphere had an advantage of different seasons.

"The harvest here comes when there is still snow in Europe. You won’t be delivering pears from Europe in January or even from Central Asia, but you can export from here," the ambassador said.

Feoktistov added that, based on this consideration, Russia was looking for solutions to increase imports from Argentina.

China-Argentina Coaction is Not 'Debt-Trap Diplomacy'
Feoktistov also commented on infrastructure projects. In particular, Russian Railways company is interested in the project on rebuilding and construction of a railroad in Argentina, discussions have been already held with state and private actors.

"There is a search for options to restore and build a railroad of about 700 kilometers [about 435 miles] … Russian Railways is showing interest, there was a delegation here, the potential participation was discussed with state and private Argentine partners. There is no bidding yet, but the numbers alone show the scale of projects that we could implement here," the ambassador said.

According to Feoktistov, the railroad in question would be needed to use Vaca Muerta oil and gas deposits: 500 kilometers would need to be rebuilt and 200 more repaired to link the deposits to Bahia Blanca port.

The ambassador added that the contract on this project could be worth $700-800 million.

Moreover, the peaceful nuclear energy cooperation projects of Russia and Argentina could be worth millions or even billions of dollars.

"Here, in this field, it is about millions and billions of dollars," the ambassador said. Feoktistov added that the sides were considering various options for future nuclear energy cooperation, including a large reactor, a small reactor, or a floating power plant.

"Building a fully-fledged plant with two reactors costs up to $10 billion. Of course this does not mean that this plant will be built," the ambassador said.

On the sidelines of G20 summit in Buenos Aires, Russia and Argentina signed a strategic document on partnership in peaceful use of nuclear energy. The signed documents were exchanged in presence of the two presidents, Russian Vladimir Putin and Argentina’s Mauricio Macri. However, Feoktistov added that there was no certain agreement yet.

Meanwhile, the media reports alleging potential US military bases in Argentina are "fake news" and Moscow does not know of such wish on part of Buenos Aires, Feoktistov stressed.

Argentina Ready to Host Several US Military Bases - Reports
"This is fake news. Maybe, someone here was planning something. Maybe, the United States wanted to establish [the base] here, but we do not know about the wish of the Argentine side, there are no bases," the diplomat said.

Feoktistov added that the establishment of anyone’s bases would need to be approved by the Congress first, and getting such an approval was unlikely.

"This is the question for the Defense Ministry, of course. Nobody has ever said that we want to set up a base here," the diplomat said. Feoktistov added that there was no need to establish such a base at the moment.

However, Russia is ready to sell any advanced weapons to Argentina without any political preconditions, but the current economic situation in the Latin American country is slowing down the development of the military cooperation, Russian envoy stressed.

"When Argentina is ready, we will deliver here any of the most advanced Russian weapons without any political preconditions, as some countries do sometimes," the ambassador said. According to Feoktistov, the Argentine government believes it cannot afford to spend money on the military when there are no indications of a military threat.

At the same time, the military personnel confirms that the country’s armed forces need modernization, the ambassador said.

"The military cooperation could be developing better if it weren’t, above all, for the current economic situation in Argentina," the diplomat said.

WATCH: U2 Singer Bono in Support of Argentina as Debt Crisis Tears Nation Apart
"Argentina is actively considering this issue [joining the FSB base] … The Argentinians are telling us that the practical cooperation between special services is their number one task on anti-terrorism, so we are expecting them to join this international database in the near future," Feoktistov said.

The diplomat added that the base was even larger than Interpol’s because it included the data from interpol as well as information from other members.

The ambassador stressed that the absence of any bilateral agreement on the fight against terrorism was a big problem for Argentina.

"We are explaining to the Argentinians that it is not even important who will be the first to sign this agreement with Argentina: Russia, the United States, Japan, or China … Argentina’s international standing is suffering from the lack of such bilateral partnership," the diplomat said.

Feoktistov stressed that the sooner Argentina signed such an agreement, the better.

In addition, Argentina would welcome more Russian media outlets in the country as they would help deliver a balanced view of the situation in the world.

"Unfortunately, there aren’t that many of our media here. If there were more of them present here, Argentina would only welcome that," the ambassador said.

Feoktistov added that the presence of the RT broadcaster and other media would help create "a certain balance that will help the viewers in Argentina" to see what is going on in the world.

On Sunday, RT said that RT Spanish broadcaster secured a prolongation of the nationwide broadcast in Argentina. Russian President Vladimir Putin and his Argentine counterpart Mauricio Macri attended the signing ceremony. However, at the start of Macri's term in 2016, RT Spanish faced suspension from the state-run programming in Argentina.

"They wanted to shut it down for economic reasons, allegedly, but in reality, at the beginning of his presidential term, Macri was experiencing, I think still is experiencing, a certain influence, if not pressure from the United States," the ambassador said.

World
It's a Deal: Russia Beefing Up Investment Ties With Argentina
RT was the first foreign broadcaster to be included in the national TV broadcasting network in Argentina.

In conclusion, the diplomat pointed out that Argentina was very interested in the Antarctic as it had about 10 stations there and Buenos Aires could use helicopters in its operations.

"The Argentinians were planning to buy three more [helicopters] from us and were interested in that. But, once again, there is no money to pay right away," the ambassador said. Feoktistov also added that Russia would like to boost cooperation on helicopters.

Argentina bought two Mi-171E helicopters in "Arctic configuration" in 2011 and has been happy with these aircraft, the ambassador said.