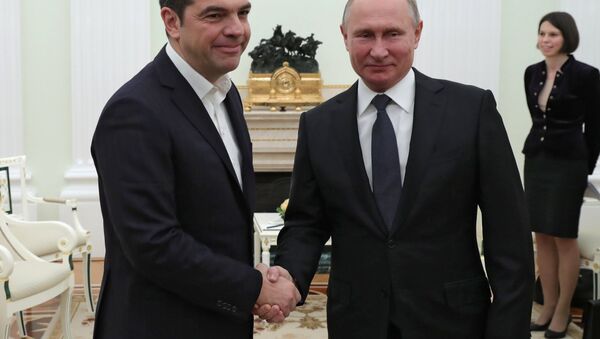 © Sputnik / Mikhail Klimentyev
/
Go to the photo bank
Subscribe
Greek Prime Minister Alexis Tsipras arrived in Moscow to meet with Russian President Vladimir Putin on Friday, 7 December. As a result of the meeting, the sides have signed a number of documents to enhance cooperation between the countries.

During the meeting, the sides touched upon the issue of gas deliveries. In particular, Greek Prime Minister Alexis Tsipras noted that the South Stream project would increase the role of Greece in the regional energy hub.

"We discussed the new energy map, which is being formed in Eastern Europe with the construction of the Nord Stream-2 and the possibility of continuing the TurkStream through Greece to Italy and later to Europe. This is a project that, in combination with other streams, enhances the role of our country, Greece, in the regional energy hub," Tsipras told reporters following talks with Russian President Vladimir Putin.

Reacting to this proposal, Putin stated that he believed it is quite realistic for Greece to join the Turkish Stream gas pipeline project.

"Regarding the energy supply routes: I have just said that… we are ready to implement large energy infrastructure projects jointly with Greece. This also applies to the possibility of connecting Southern Europe via Greece to the Turkish Stream… This is quite realistic," Putin said.

Apart from that, Tsipras stated that the Trans Adriatic Pipeline (TAP) could also be filled with Russian natural gas, as all technical capabilities exist to do this.

"80 percent of the TAP pipeline is ready. I believe that we have the necessary technical conditions for this pipeline to include Russian gas, and I believe that this will benefit the European economy and the entire region," Tsipras said, adding that Greece will promote its position at meetings with European partners.

Russian President Vladimir Putin, in his turn, commented on the present diplomatic ties between the countries, stressing that Russia will continue to support the Greek people regardless of the situation in Greece.

"We have always supported the independence of Greece from the very first steps, supported the Greek people and the Greek state. And we will continue to do so regardless of whether the Greek people are experiencing difficult times or are prospering. The reason for this is in our historical relations, spiritual kinship and so on," Putin said at a press conference following talks with Greek Prime Minister Alexis Tsipras.

He wished Greece to overcome all economic difficulties.

Speaking about a diplomatic scandal that erupted this summer, the Russian President once again underlined that Moscow will never believe in the existence of reasons that led to expulsion of Russian diplomats from Greece.

"First of all, we disagreed from the start… with the grounds for expulsion of our diplomats. I can hardly imagine that someone sensible in Greece and Russia might think that Russia is 'scheming' against Greece or plots some conspiracies," Putin said.

"It’s just nonsense. If the intelligence services have any questions for each other, which is also possible, there are many ways to resolve this kind of situation, without any theatrical gestures. I hope this page [in Russia-Greece relations] has really been turned over," Putin stressed.

The mentioned diplomatic scandal erupted between the two countries this summer. In July, Athens decided to expel two Russian diplomats over allegations that they had attempted to sabotage the Greek-Macedonian talks on renaming the Former Yugoslav Republic of Macedonia (FYROM) to the Republic of North Macedonia.

Russia dismissed the accusations as "absurd" and responded in kind, with Russian Foreign Ministry spokeswoman Maria Zakharova saying that Greece had been pressured into ordering the diplomats out.

In the run-up to Tsipras' visit, both Moscow and Athens expressed hope that it would end the period of uneasy relations between the two countries.