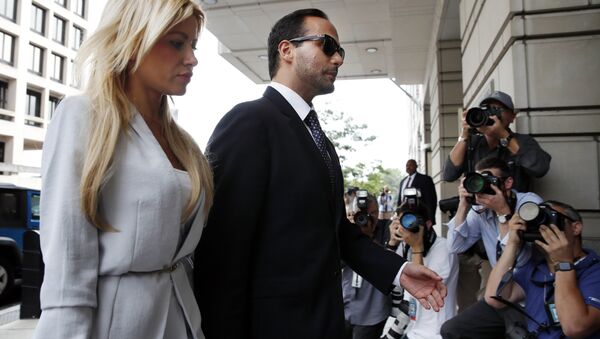 © AP Photo / Jacquelyn Martin
Subscribe
International
India
Africa
In November, George Papadopoulos was imprisoned, accused of lying to the FBI about his alleged contacts with Russians working for Trump during the presidential campaign. Before being jailed, he pledged that in the end, "the truth will all be out".

George Papadopoulos, a former-Trump campaign aide, was released from prison on Friday after spending 12 days there, earlier being convicted for an alleged false testimony he gave during the FBI investigation into Russia's alleged meddling in the 2016 presidential elections.

After his release, Papadopoulos will be subject to 12 months supervision and will have to serve 200 hours of community service. He is also obliged to pay a $9,500 fine.

Papadopoulos, renouncing his support for the US President Trump, tweeted the night before he was sent to prison that "the truth will all be out. Not even a prison sentence can stop that momentum".

George Papadopoulos has rejected all accusations suggesting that he had contact with a mysterious Russian agent, Professor Mifsud, saying that he had "never met a single Russian official" in his life. However, he was sentenced to serve 14 days in jail. No solid proof of his guilt was established.

READ MORE: Former Trump Aide Reports to Prison After Claiming He Was Entrapped

Papadopoulos' statements echo those expressed by Trump, who has frequently characterized the Russia investigation as a "witch hunt" and accused the team of Special Counsel Robert Mueller of bias and corruption.

Russia has repeatedly denied all allegations of meddling in US internal affairs, in particular in its 2016 presidential elections.