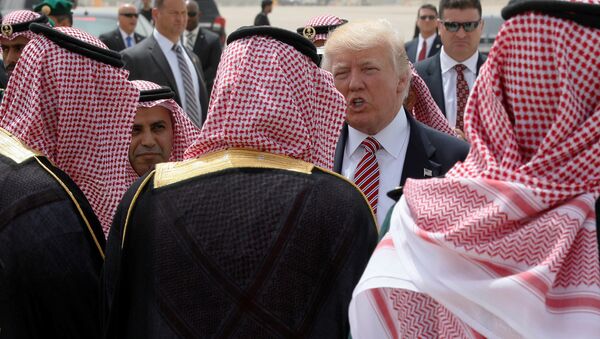 © REUTERS / Jonathan Ernst
Subscribe
A group of US citizens has been trying to sue the Saudi government for a long time over its alleged funding of terrorist groups, including Al-Qaeda, which organised the terror attack on September 11, but failed due to the US legislature’s limitations. Riyadh has denied these claims, pointing out that no Saudi was found responsible for the attack.

Lobbyist firms hired by the government of Saudi Arabia have organised numerous trips by US war veterans to Washington since 2016 to oppose the Justice Against Sponsors of Terrorism Act (JASTA), adopted in September 2016, the official documents submitted under Foreign Agents Registration Act show. Additionally, according to research by The Washington Post, the kingdom paid for some 500 suites in Trump International Hotel to accommodate these veterans.

The veterans' trips to DC were organised by NMLB Veterans Advocacy Group, hired in turn by the lobbying firm Qorvis/MSLGroup, which represented Saudi Arabia's interests in the US. NMLB urged US veterans to "storm the [Capitol] Hill" and lobby against JASTA, which allowed US citizens to prosecute any foreign state, allegedly funding international terrorism, opening the door to a long-term lawsuit by September 11 victims against Saudi Arabia.

According to the veterans, interviewed by The Washington Post, they were told that in case the law stays, other countries may reciprocate by adopting similar laws, allowing their citizens to sue US soldiers for their actions. According to the media outlet, most of the veterans do not recall being warned that they would be acting on behalf of Saudi Arabia. At the same time, Jason Johns, head of the NMLB Veterans Advocacy Group that organised the trips, claimed in an interview with the outlet that he always made clear to the veterans that Riyadh was paying for their stay in Trump's hotel.

Johns explained the use of the hotel, owned by the US president until this day, by saying it offered significant discounts and had rooms available. Prior to December 2016, he used other hotels, but, after the first positive experience, he stuck with Trump International Hotel through January and February 2017.

The fact that the Saudi government paid for stays in Trump's hotel is not news and is currently being used in a suit against him over allegations that the US president's campaign was illegally funded by a foreign government. Trump's lawyers insist that ordinary business transactions do not constitute a violation of the law.

Some of the veterans, interviewed by The Washington Post, said the idea to lobby against JASTA after it was adopted by the US Congress overriding Barack Obama's veto looked weird, since no one on the Hill was really interested in raising the matter again. One of the veterans, Robert Suesakul, noted that sometimes they didn't talk about the bill at all during their meetings with the lawmakers.

US President Donald Trump faced calls for scrutiny over his claims that Saudi Arabia will remain a strategic partner of the US despite the scandal over the murder of journalist Jamal Khashoggi. Former presidential candidate and Trump's opponent during the 2016 election, Hillary Clinton alleged that Trump had a "personal interest" and thus agreed to be a "part of a cover-up" for the murder of the Saudi journalist.