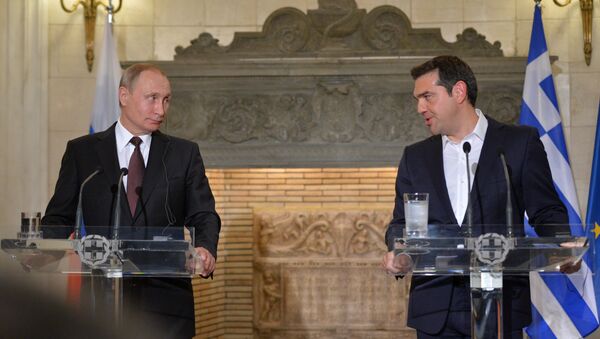 ATHENS (Sputnik) - The minor setback in diplomatic relations between Greece and Russia is a thing of the past, Greek Alternate Foreign Minister George Katrougkalos told Sputnik on the eve of the second day of the 11th meeting of the Joint Russian-Greek Commission on Economic, Industrial, Scientific and Technical Cooperation in Moscow.

"Russia is a country with whom we have had friendly relations and common historical and cultural traditions for centuries. This year, we celebrate the 190th anniversary of our diplomatic relations. [Although] we did see a cloud quickly pass over our traditionally good relations," Katrougkalos said, adding that the conflict was already a matter of the past.

The alternate foreign minister, who acts as a co-chair of the joint commission, added that ways of improving bilateral relations would be personally discussed by Russian President Vladimir Putin and Greek Prime Minister Alexis Tsipras on Friday during the latter's official visit to Moscow.

"On December 7, the two countries' leaders will consider steps necessary for improving relations between the two nations, in particular, at the level of bilateral economic relations and contacts between our people. We think that 2019 will be the year of the Greek-Russian culture. In turn, my colleague, co-chair of the intergovernmental commission, [Russian] Transport Minister [Yevgeny] Ditrikh, and I will touch upon and look for further ways to cooperate in trade and investment," Katrougkalos said.

World
Greece Seeks to Continue Defense Industry Cooperation With Russia – DM
In July, Greece decided to expel two Russian diplomats over their alleged attempts to sabotage the Greek-Macedonian talks on changing the name of the Former Yugoslav Republic of Macedonia (FYROM) to the Republic of North Macedonia. Russia responded by expelling two Greek diplomats, with Russian Foreign Ministry Spokeswoman Maria Zakharova saying that Greece was pressured into expelling the Russian diplomats.

According to the diplomat, Athens is interested in seeing the TurkStream pipeline, which carries Russian natural gas, extended to Greece. The alternate foreign minister added that Greece also noted the considerable potential for Russian investment.

"Our potential is [now] much higher in many areas since the Greek economy has fully recovered [from an economic crisis]. In the last quarter [of the year], it has risen by 2.2%, and the forecast for 2019 is even better, around 2.5%… The new development law envisages important guarantees and incentives for investors. There have never been more favourable conditions for investment in our country," Katrougkalos added.

Next Stage is to Agree on the European Section of TurkStream – Spokesman
The TurkStream pipeline project envisages the construction of a gas pipeline comprising two legs, each with the capacity to deliver 15.7 billion cubic meters (554 billion cubic feet) of gas per year. The first leg is set to bring gas across the Black Sea directly to Turkey, while the other one will run across Turkey to its western border, transporting natural gas to countries in the south and southeast of Europe.

READ MORE: Macedonia: The Name That Broke The Russian-Greek Bond?

Russia's energy giant Gazprom, responsible for the pipeline's construction, has been considering options for extending the second leg of the pipeline through Bulgaria and Serbia or through Greece and Italy.