'Justice Has to Dig Much Deeper' Amid Netanyahu Corruption Scandal – Activist 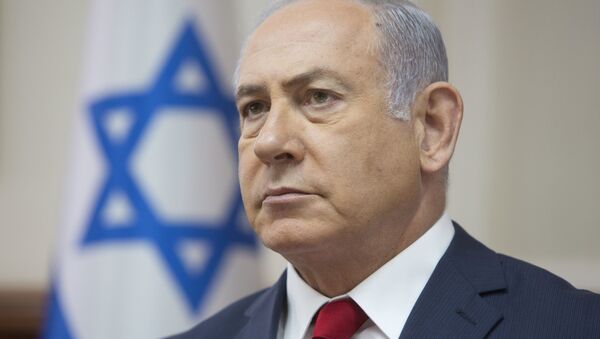 Since the beginning of the year the Israeli police have put forward three corruption cases against Prime Minister Benjamin Netanyahu accusing him of alleged bribery, fraud, and breach of trust, which the latter has denounced as a "witch hunt." Speaking to Sputnik, Belgian human right activist Andy Vermaut has shared his views on the issue.

"Benjamin Netanyahu has of course tried to influence public opinion, which seems to be gradually becoming clear, but as long as you are not convicted, you obviously still have the benefit of the doubt and the presumption of innocence", Andy Vermaut, a Belgian human rights activist told Sputnik.

However, it appears that clouds are gathering on the horizon for the Israeli prime minister, according to Vermaut.

On 2 December Israeli police recommended to indict Netanyahu and his wife Sara for bribery, fraud, and breach of trust in the so-called Case 4000.

According to investigators, the prime minister is suspected of promoting the interests of the telecommunications company Bezeq and its majority shareholder Shaul Elovitch in exchange for favourable coverage on the the Walla! news website, owned by Bezeq. The Israeli police claim to have evidence, including testimonies, which confirm the allegations.

World
Israeli Police Recommend Bribery Charges Against Benjamin and Sara Netanyahu
Earlier this year, the investigators came up with Cases 1000 and 2000 recommending that Netanyahu be charged with bribery, fraud, and breach of trust. Case 1000 presumes that the prime minister received expensive gifts from the business community worth $300,000, while Case 2000 suggests a conflict of interest involving Netanyahu and Arnon Mozes, Yedioth Ahronoth daily's publisher.

"Multiple proofs are accumulating and you find that two things betray Benjamin Netanyahu's familiar way of acting", Vermaut said. "If the big boss of a big newspaper really went into it, that is a serious [blow to] the independence of the press in Israel. Not only Benjamin Netanyahu is blamed here, [but also] the newspaper that has concluded this mutual agreement with the prime minister to [create] a positive public [image]."

The activist expressed hope that the case would be made public and clarified in detail. According to Vermaut, one cannot "speak of democratic values, if [one] undermine[s] those democratic values in every way possible". "Civil society should also act and give a signal to the political establishment that this is not okay", he highlighted.

Israel Calls for Anti-Hezbollah Sanctions as Its Anti-Tunnel Operation Unfolds
Vermaut opined that Israeli journalists who allegedly cooperated with the prime minister "should also be punished for this" even if they just followed orders: "There is also something like journalistic deontology", he said.

"In Case 1000, much more needs to be checked as to whether the gifts received by the Netanyahu family have led to some political decisions being influenced in favour of those contacts", the activist continued. "There Israeli justice must do its work thoroughly and also bring those corrupt to the court. In other words, Israeli justice has to dig much deeper".

Vermaut also suggested that the Knesset, Israel's unicameral parliament, should put the prime minister's suspected corruption cases under the spotlight, adding that "a parliamentary inquiry committee should try to restore confidence".

Israel’s Op Against Hezbollah a Stunt to Distract From Bibi’s Bribes
According to Vermaut, Netanyahu should "renounce his premiership" for the sake of the country's democracy: "It would be a good thing [if] Benjamin Netanyahu renounces his premiership and that [would be] in the interest of Israeli democracy…"

Meanwhile, Prime Minister Netanyahu "has denied wrongdoing in all of the cases," accusing the police of launching a witch hunt against him, The Times of Israel reported on 5 December. The media outlet noted concerning Case 4000 that Netanyahu's lawyers dubbed it "nothing but hot air" and said that "evidence or documents" cited by the police "weren't even presented to the prime minister in his interrogations".

The media outlet further elaborated that the recommendations had been sent to Attorney General Avichai Mandelblit's Office where they would be reviewed by the state prosecutor.

The attorney general is due to consider all three cases — Case 1000, Case 2000, and Case 4000 — at the same time. "That process makes late 2019 the likely timing for any final word on whether Netanyahu will face trial", The Time of Israel summarised.