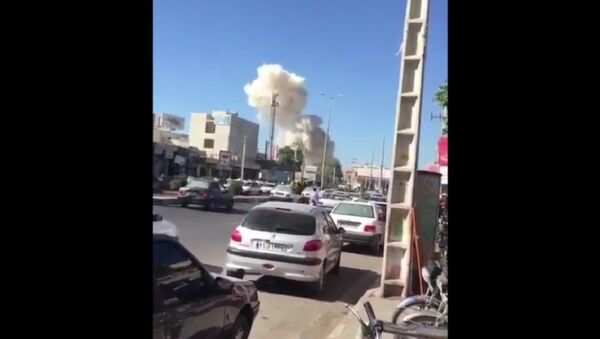 A number of Iranian media have reported a car explosion in the largest port city in Sistan-and-Balochistan province, Chabahar.

The blast near Chabahar's police headquarters on Shahid Rigi Boulevard has been confirmed by Mohammad Hadi Marashi, the deputy security chief of the province.

The governor of Sistan-and-Baluchestan Province, Rahmdel Bamari, told the IRNA news agency that at least two people were killed and many others injured.

“Terrorists attacked the police post in Chabahar with an explosives-laden vehicle,” he said.

The head of the emergency medical centre, Reza Nasekh, confirmed to Sputnik that "28 people were injured and 2 died as a result of the terrorist attack that occurred this morning".

Iranian authorities have not identifed the perpetrator yet, but said that the "terrorist responsible for Chabahar bomb attack" was killed.

Pictures of the SVBIED explosion in Chabahar, Iran#Iran #Chabahar pic.twitter.com/L3HYuqUHkv

In the meantime, Mizan news agency has cited an anonymous source as saying that the suicide bomber blew himself up at the headquarters after being stopped by the security forces. After that, according to the agency, several attackers who intended to open fire were eliminated.

'The Attacker Was Not Local' – Eyewitness

Mahmoud Balouchi, the owner of a shop near the place where the attack took place, witnessed the attack this morning. He has told Sputnik about how it all happened.

“The assault was committed in order to attack Chabahar’s command of the armed forces. After the warning, the guards started shooting in the air, but the man drove toward the gate, and then the explosive device went off. The explosion resulted in the injuries of two guards and the deaths of several people including some civilians that had been in the area at the time of the attack. Many local residents were injured by shrapnel or the blast wave”.

Mahmoud believes the attacker was not a local resident:

“Definitely, the terrorist was not local. None of the local residents has a bad bone in their body. They couldn’t harm anybody, let alone their fellow countrymen. The terrorist’s goal was to breach the perimeter of the police headquarters”.

He told Sputnik that many people are unknowingly amenable to enemy propaganda.

“Terrorist groups cultivated by the United States, Saudi Arabia, the UAE, and Israel tend to use these people in such operations. Many of the terrorists are trained in Pakistan and then sent here”, Mahmoud explained, adding that since ancient times, Sistan and Baluchestan Province has been the eastern gateway to Iran, and the local people “will guard it”.

“Chabahar was the last refuge for this terrorist”, Mahmoud concluded.

000000
Popular comments
Watch- [Israel/USA’s] Daesh will claim responsibility for it.

Preterist-ADSeventy
6 December 2018, 10:41 GMT1
000000
Three people reported dead. This is the same city that planned to be a corridor for economic development with India. You can guess who was behind it!