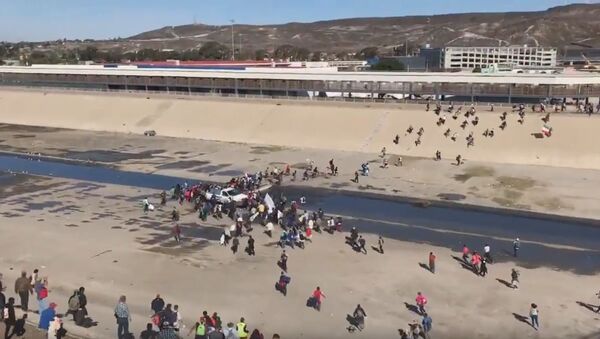 Dozens of migrants from Latin America, frustrated by weeks of remaining in poorly-equipped camps, have gone over the 10-foot border fence in Tijuana, according to Reuters.

"A significant number of people tried to illegally cross the border and many of them were detained in the United States. The number of [detained] people reached some 800", Guillen Lopez said.

He pointed out that currently, some 2,500 migrants remain in a migration camp near the Mexican-US border, not far from the city of Tijuana. According to Guillen Lopez, some of the migrants have decided to return home.

Mexico's Tijuana Shelter of 6,000 Caravan Migrants Closed
This breach follows a similar incident when a group of around 500 migrants attempted to storm the US border near Tijuana on 2 December and reportedly threw projectiles at the US border patrol, prompting American authorities to use tear gas and rubber bullets against the asylum seekers.

The migrants are fleeing violence and poverty in their home countries with the hopes of being able to seek asylum in the United States. US authorities have said that around 600 people in the migrant caravan have criminal records.

There are some 5,600 migrants at the Albergue Benito Juarez shelter in Tijuana, according to the local municipal police.

000000
Popular comments
Some of those migrants come from Honduras. The U.S. Role In The Honduras Coup And Subsequent Violence www.huffingtonpost.com/entry/the-us-role-in-the-honduras-coup-and-subsequent-violence_us_5766c7ebe4b