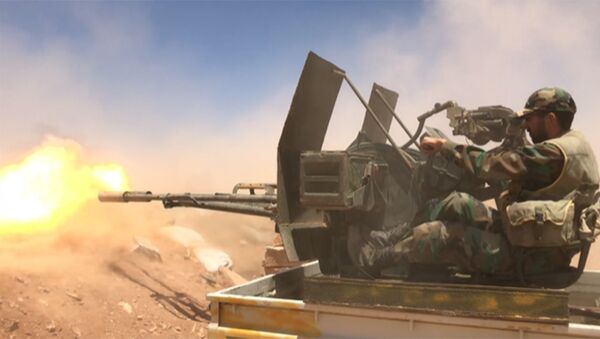 DAMASCUS (Sputnik) - The Syrian government forces neutralized 23 members of the Daesh terror group in the desert to the east of the Syrian city of Homs, local media reported Wednesday.

According to the Ikhbariya broadcaster, the military ambushed the terrorists between Bir al Halba and Bir as Safania.

In November, a bomb detonated in a bus in the Syrian city of Homs, leaving reportedly at least eight people injured.

US Soldier Given 25 Years in Prison for Attempting to Aid Daesh
Before Homs was liberated from terrorists, the local neighborhood had been one of the most vulnerable areas in the city, being frequently rocked by terrorist attacks and shelling.

Syria has been engulfed in an armed conflict since 2011. In late 2017, the victory over the Daesh terrorist group was declared in Syria and Iraq, with some territories of the two countries still being cleared of terrorists with the assistance of the Russian forces. The main efforts in Syria are currently focused on political settlement and post-war reconstruction of the country.

The regional governor Talal Barazisaid said earlier that terrorists inflicted at least $2 billion in damages in the Syrian province of Homs, stressing that Homs was returning to normal life, as it was in 2010 before the crisis.