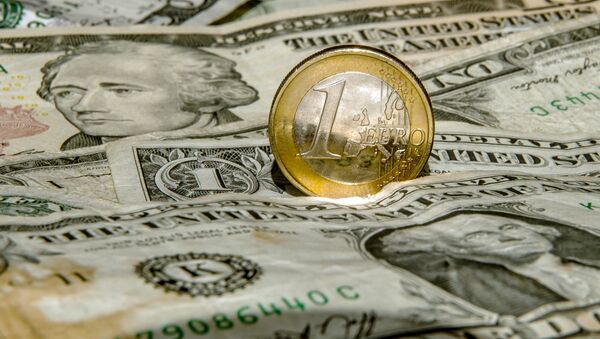 © AFP 2022 / PHILIPPE HUGUEN
Subscribe
The European Commission has presented a set of measures to boost the euro as a global reserve currency to challenge the dollar in international transactions, including those in the energy sector.

A number of states have taken the course of de-dollarisation in a bid to decrease dependence on the greenback and its clout on the energy sector, mainly in transactions with sanctions-stricken Iran.

When Washington imposes sanctions, other actors face a stark choice: either terminate business relations with the state under restrictions or to be banished from the global financial system.

France Will Lead EU Drive to Defy Iran Sanctions, Bolster Euro – Minister
The system seemingly worked well for the US until trade wars unleashed by President Donald Trump changed the state of affairs.

In a bid to defy the US dollar, the European Union has set out plans to flex the euro’s muscles in such strategic sectors as energy, commodities, and aircraft manufacturing, the Financial Times reported.

According to the media outlet, the reason for that is Trump’s America First policy that has underscored the need to promote a stronger “international role” for the euro and boost the bloc’s economic sovereignty.

“In the current contest of uncertainties – trade conflicts, extra territorial sanctions by the US – the market participants are looking for alternative”, said EU economics affairs commissioner Pierre Moscovici.

The commission’s vice-president, Valdis Dombrovskis, in turn, said in Wednesday that the single currency – the euro – should reflect the political, economic and financial weight of the eurozone.

EU Should Expand Use of Euro in Energy Deals With Third Countries - Commission
As of today, more than 80 percent of the European Union’s energy imports are priced using the dollar, therefore, Brussels wants EU capitals to guarantee that deals sealed “within the framework of intergovernmental energy agreements” are denominated in euros.

The issue of currencies used for energy transactions has been back in the spotlight due to European efforts to save the nuclear deal with Iran after the US unilaterally withdrew from it.

EU nations have struggled to circumvent Washington’s sanctions on Tehran to make sure that their companies can continue doing business with the country without facing secondary restrictions by the US.