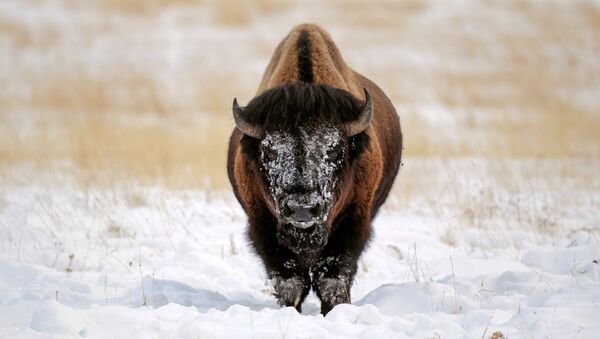 © East News / Keith Crowley/Solent News & Photo Agency
Subscribe
Inside the arena, 23-year-old Ren Ruzhi is wrestling with an opponent five times his weight: a bull. He holds the two horns of the bull tight, musters all his strength and suddenly yells out loud, as he wrestles the bull to the ground.

Ren is one of China's few kung fu bull wrestlers. He practices the traditional sport at the Haihua Martial Arts Club in Jiaxing, East China's Zhejiang Province. Bull wrestling in Jiaxing can be traced to the Song Dynasty (960-1279), when a group of Hui Muslims entered the eastern city. Each year during the Eid al-Adha, or the Feast of the Sacrifice, the Hui people fight bulls before slaughtering them for the festival.

In 1982, Han Haihua, a professional wrestler and a Jiaxing native of Hui ethnicity, brought this tradition to a broader audience. Han performed bull wrestling in China's Traditional Ethnic Minorities Sports Games that year, which made bull wrestling a recognized sport. Over the years, at his martial arts club, Han, 65, has been training bull wrestlers and trying to pass down this tradition.

But the traditional sport has raised concerns from animal protectionists over concerns of animal cruelty.

Han Haihua denies the allegation. "Unlike Spanish bullfighting, in which the matador plunges his sword into the bull's heart and kills it, Chinese bullfighting does not use a weapon. Neither will the bull be killed after a fight. Each bull can serve three to five years before they retire," Han told the Global Times.

Ren said, "We regard the bull as our opponent, and before each match, we bow to the bull to show our respect." He adds that human wrestlers risk much more danger than the bulls — including breaking their bones and being stabbed by the bulls' horns.

Han said wrestling with a bull requires the basics of kung fu, the flexibility of wrestling, and the explosive force of hard qigong. "It's 60 percent strength plus 40 percent skills," said Ren.

Float Like a Butterfly, Sting Like a Dragon: Shaolin Monks’ Kung Fu Display
This is why apprentices are required to learn kung fu and qigong for two to three years before they can start learning bullfighting. Apart from kung fu moves, their daily exercises also include pulling vehicles with rope and hands and flipping large tires.

"In the beginning, we were intimidated by the bull. But as we get familiar with them, we're used to it," Ren said. The Haihua Martial Arts club now has around 20 bulls, which are specially selected and trained for the sport.

Han said when he was young, bulls plowed farmland and were powerful. But as China industrialized farming, bulls were mainly bred and fed for the beef industry, and most bulls no longer have the physical strength and stamina required for bull fighting.

They search for bulls which grew up in rural mountains, and feed them with natural grass and protein powders. They train the bulls by making them run every day.

Bull wrestlers show their strength at the Haihua Martial Arts Club in Jiaxing, East China’s Zhejiang Province on Tuesday. Bull wrestling is a traditional sport of the Hui ethnic minority and can be traced back to the Song Dynasty (960-1279) in Jiaxing. https://t.co/UNcXb15Mdl pic.twitter.com/4EiAOjw6ev

But still, bulls are docile creatures and are not natural fighters. Before each wrestling match, one man needs to chase the bull and make it more energetic.

Over the years, bull wrestling as a culture and sport has gained the approval and support of Jiaxing's local government, which grants Han a total subsidy of over 1 million yuan ($144,090) each year to pass on and promote the tradition. However, finding successors for the dangerous art isn't easy.

Han said he used to have some Hui apprentices, including his own nephew, but as they entered adulthood and had to make a living, they all left. Han had also tried to invite professional wrestlers and kung fu masters from the Shaolin Temple to come to his martial arts club and help pass on this tradition. "However, they frown at the idea of having to wrestle with a bull," Han told the Global Times.