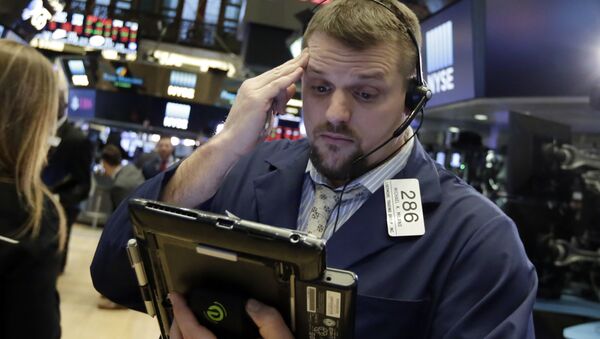 © AP Photo / Richard Drew
Subscribe
The Dow Jones Industrial Average sank some 790 points, or about 3 percent, on Tuesday amid a large sell-off in stocks across the board.

Few industries were spared. Transportation stocks like UPS and FedEx tumbled amid skepticism and confusion about the truce between the US and China on trade. According to an investment note published by Morgan Stanley, Amazon's new "Amazon Air" service, which features a fleet of 40 transport aircraft, is eating away at UPS and FedEx's air shipping business. But Amazon's stock fell about 5.87 percent anyway.

As ZeroHedge reports, the US stock market has been somewhat "neurotic" this quarter. On 19 trading days — 20 including Tuesday — the S&P 500 has sunk or risen more than 1 percent. The average number of such volatile days for Q4 is about 14 since 1958 — and about 17 trading sessions still remain this year.

On Tuesday, Jamie Dimon, chief executive of JP Morgan Chase, voiced concern that "there's no way you can see the complexity of these trade negotiations in 90 days… I'm hoping they'll announce that they've made progress enough to continue negotiating."

US President Donald Trump and Chinese President Xi Jinping agreed to a temporary trade truce for 90 days during the G20 summit over the weekend, stalling the imposition of even greater tariffs.

If no agreement is reached, "remember, I am a Tariff Man," Trump said Tuesday in a tweet.