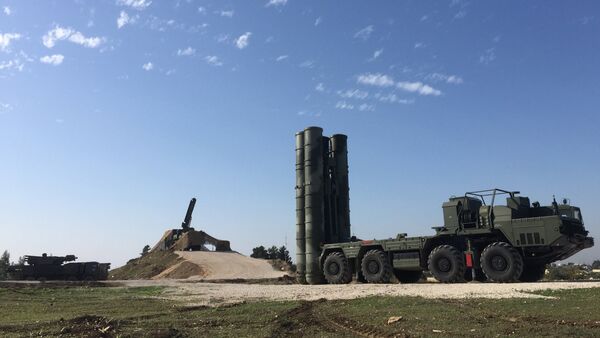 WASHINGTON (Sputnik) - The possible activation of Russian S-400 missile defenсe systems in Syria would pose an increased threat to American troops and US-led coalition forces, Gen. Kenneth McKenzie, nominee to head US Central Command (CENTCOM), said during his confirmation hearing in the US Senate on Tuesday.

"The S-400, once activated, will increase the threat to our forces and our coalition partners flying over Syria," he said. "We are still working out on how it is going to be executed."

Russia has deployed S-400 mobile missile batteries at the Khmeimim Airbase in Syria but has not yet activated the defence systems.

The S-400 is the next-generation mobile defence system which can carry three different types of missiles capable of destroying a variety of aerial targets at short and extremely long ranges, from reconnaissance aircraft to ballistic missiles.

McKenzie also stressed that Washington would not seek to affect the Russian forces in the region while conducting operations against terrorists.

"It is clearly not an objective of our presence in Syria," McKenzie said during Senate testimony when asked whether the goal of the US military presence in Syria was to serve as a check against Russia's influence there.

Made in the USA: Syrian Troops Reportedly Capture a Trove of TOW Missiles
The US-led coalition of more than 70 countries is conducting military operations against the Daesh* terror group in Syria and Iraq. The coalition's operations in Iraq are conducted in cooperation with the Iraqi government, but those in Syria are not authorized by the government of President Bashar Assad or the United Nations Security Council. Moreover, according to Damascus, the coalition killed a vast number of civilians during the campaign and used white phosphorus munitions, which are banned by the UN.

*Daesh, also known as IS/ISIL/ISIS/Islamic State, is a terrorist organisation banned in Russia