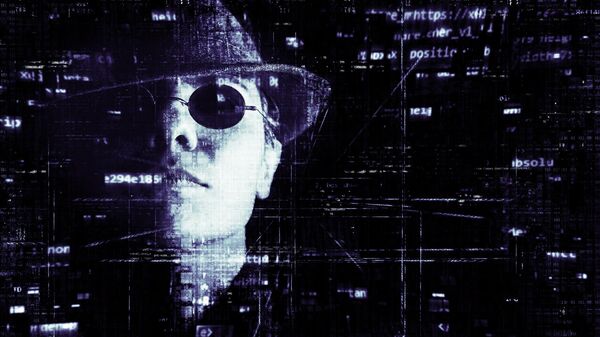 International hacker group Anonymous went ahead with its efforts to counter what it calls Britain's interference with the domestic affairs of sovereign states. In a second dump of secret documents within two weeks, the hacktivists disclose more details on the ongoing UK-funded, anti-Russia information campaign spreading across Europe.

The second batch of documents leaked by Anonymous unravels more information on the activities of the Integrity Initiative (II), a UK-based NGO ostensibly founded to counter disinformation and defend democratic processes from malign influence. According to the first documents leaked by the hacktivist organization last month, the project was in fact a "large-scale information secret service" sponsored and created by London to tackle 'Russian propaganda.'

However, the latest leak suggests that "the British government goes far beyond and exploits the Integrity Initiative to solve its domestic problems inside the United Kingdom by defaming the opposition."

Anonymous refers to a "scorching" article that surfaced in The Times on November 25 and was dedicated to Seumas Milne, director of strategy and communications under Labour leader Jeremy Corbyn. The Times' official Twitter account promoted the piece three times within 24 hours on social media — the only case for all of its articles, Anonymous says. The hacktivists add that the Integrity Initiative retweeted the "defamatory" article right after its publication (the post is now unavailable, but Anonymous provided a screengrab of the retweet). 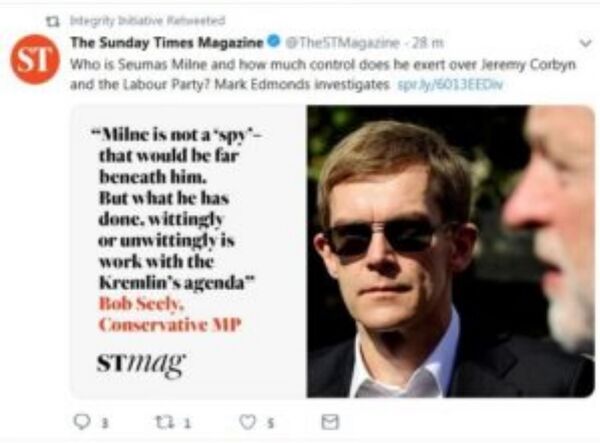 The group announced in November that the II constituted a network of clusters across Europe, which sought to tamper with domestic affairs of several European countries such as France, Germany, Italy, Greece, the Netherlands, Lithuania, Norway, Serbia, Spain, and Montenegro.

Another part of the leak is an interim report on the establishment of a German cluster, which was purportedly written by Hannes Adomeit, a German political expert specialising in Russian foreign policy. According to the uncovered documents, the German cluster is coordinated by suspected MI6 agent Harold Elletson.

The report focuses mainly on research of Germans' attitudes toward Russia. Adomeit says that the so-called "Russian narrative" on the origins of the crisis in Moscow's relations with the West is "widely accepted by German public opinion." He adds that further research would be carried out to examine "the reasons for the great receptivity of the Russia narrative" in Germany.

He also addresses the case of Andrei Kovalchuk, a Russian arrested in Germany on suspicion of smuggling cocaine to Moscow from Argentina. Kovalchuk was extradited to Russia in late July — much to the dissatisfaction of Adomeit, who suggests that German prosecutors could have "made an effort" to question him and dig up some dirt on Russia.

The activities of the Integrity Initiative's Spanish cluster were partly revealed by Anonymous in the first leak on the project. However, a newly unveiled document titled "Cluster Breakdown" identifies people associated with the Spanish chapter. 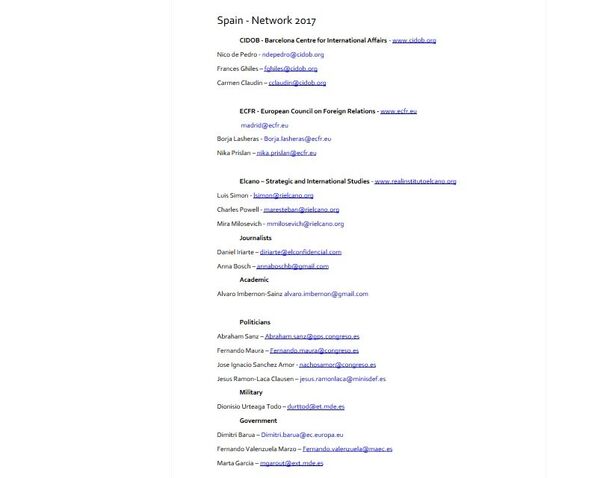 The Spanish cluster was apparently closely watching Russia's reaction to the movement in support of Catalan independence in 2016. According to another leaked interim report, the project's members were disappointed with Russia's moderate position on the situation in Spain. However, they claimed, while Vladimir Putin insisted that the issue of Catalan sovereignty was Spain's internal affair, he was happy to watch Europe "take its own medicine" (a reference to the 2008 Kosovo declaration of independence).

This is why, they said, the Russian media took advantage of the 2016 developments in Catalonia to portray the European Union as "declining, undemocratic and troubled". They went on to link the media coverage of the Catalan events in Russia to Russia's alleged disinformation campaign against the West.

The authors contend that given that Catalonia has become part of Russia's "big narrative about the West," Russian meddling has also become part of the debates in Spain. "This represents a clear window of opportunity" for promoting anti-Russia sentiment, they conclude.

The Integrity Initiative's Greek cluster was keeping a close eye on the media coverage of the Salisbury poisoning in local newspapers. They went to considerable lengths, studying 193 articles across six major media outlets. It seems, however, that the result of all the hard work was rather unsatisfactory: the authors confess that the majority of Greek newspapers adopted a neutral stance towards the Skripal case.

They claim that the Greek media were influenced into not taking sides and remaining unbiased. "The strong pro-Russian sentiment in the Greek public opinion seems to have influenced the Greek newspapers not to emphasize Russia's involvement."

The Integrity Initiative has yet to comment on this information dump. Anonymous claimed that it released the second batch of documents after the EU leaders and international organisations had ignored its first disclosure. The group accused the II and its sponsors of failing to "give assurances that the network of clusters will only be used to counter Russia's disinformation policy."