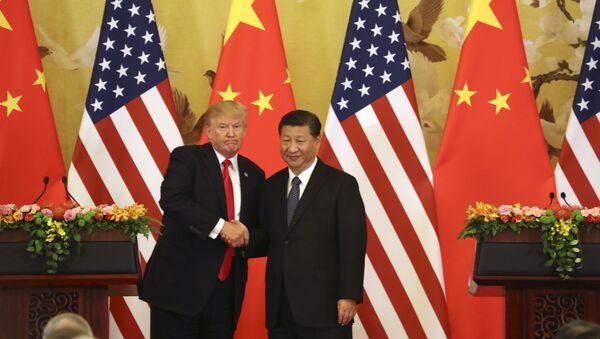 © AP Photo / Andrew Harnik
Subscribe
International
India
Africa
MOSCOW (Sputnik) - US President Donald Trump said on Monday that he will hold talks at some point in the future with China's President Xi Jinping and Russia's President Vladimir Putin in an effort to halt a costly global arms race.

"I am certain that, at some time in the future, President Xi and I, together with President Putin of Russia, will start talking about a meaningful halt to what has become a major and uncontrollable Arms Race. The US spent 716 Billion Dollars this year. Crazy!" Trump said in a Twitter message.

The statement follows Trump's earlier announcement that he had had an "extraordinary" meeting with Chinese leader Xi Jinping in Argentina.

"My meeting in Argentina with President Xi of China was an extraordinary one. Relations with China have taken a BIG leap forward! Very good things will happen. We are dealing from great strength, but China likewise has much to gain if and when a deal is completed. Level the field!" Trump said.

Commenting further on his relationship with China's leader, Trump said that he and Xi Jinping were "the only two people" who could lead to significant and "positive change on trade and far beyond."

President Xi and I have a very strong and personal relationship. He and I are the only two people that can bring about massive and very positive change, on trade and far beyond, between our two great Nations. A solution for North Korea is a great thing for China and ALL!

Trump's comments follow earlier statements made by vice president of China operations at the US-China Business Council, Jacob Parker, that the outcome of the most recent meeting between Donald Trump and his Chinese counterpart Xi Jinping would allow them to delay the possible further escalation of a trade war between the two countries, and to find long-term solutions for better bilateral relations.

The announcement came amid Trump's statement made earlier in the day that China agreed to reduce its tariffs on American cars coming to the Asian country.

On Building the Wall

Later in the day, Trump addressed the issue of illegal migration in his Twitter post stressing that billions of dollars could be saved if the Democrats provided the votes to build the wall at the US-Mexico Border.

We would save Billions of Dollars if the Democrats would give us the votes to build the Wall. Either way, people will NOT be allowed into our Country illegally! We will close the entire Southern Border if necessary. Also, STOP THE DRUGS!

US-China Trade War May Lead to Global Recession as Early as in 2019 - RDIF Head
On Saturday, Trump and Xi held a meeting on the G20 summit's sidelines. Washington announced that Trump agreed to suspend plans of raising the tariffs on $200 billion worth of Chinese products from 10 percent to 25 percent starting from January 1, 2019, in order to pave the way for trade talks with Beijing, but warned that if the trade talks do not succeed within the next 90 days, the tariffs will be raised to 25 percent as planned.

Meanwhile, the Xinhua news agency also reported, citing the Chinese Foreign Ministry, that the two countries had agreed to expedite talks toward eliminating all additional tariffs.

Tensions between the United States and China rose in May when the US administration said it would levy extra taxes on $50 billion worth of Chinese goods, bringing that figure up to $250 billion over the next few months. China retaliated with tariffs on $110 billion of US imports.