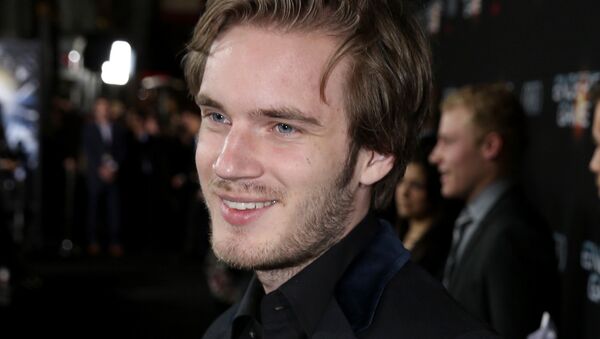 The owner of the most-subscribed YouTube channel, Felix ‘PewDiePie’ Kjellberg, while fighting with an Indian T-series channel to keep his top place, received unexpected support as printers around the world began autonomously pumping out leaflets calling for people to subscribe.

The war between Kjellberg and T-series entered the physical world months ago as ‘PewDiePie’ fans started an action to raise awareness of the Swedish video blogger competition against a big Indian music record label's official YouTube channel. Kjellberg, who's subscribers number gap with the Indian company’s channel narrows, joined in on the action, jokingly asking fans to convince people to subscribe to his creative output.

As a result, PewDiePie fans jumped in on the new meme and did everything from placing posters to playing Kjellberg’s diss-track slamming T-series at dance clubs. Another popular YouTuber MrBeast even launched a local advertising campaign to buy all billboards, radio spots, and local TV spots available.

Over the last several days Twitter users have been posting images of printouts from internet-or-things (IoT) printers, calling for people to unsubscribe from T-series and subscribe to the YouTube PewDiePie channel.

Printouts call T-series a channel that “simply uploads videos of Bollywood trailers and campaigns” and asks users to “tell everyone you know” about the highly-publicized YouTube competition. Printouts feature PewDiePie’s signature “brofist” figure as ASCII text. Users from the US, Canada, the UK and other countries reported that printers were hacked and printed out these messages.

@pewdiepie I work in IT around Brighton and our Printers are being hacked….is this your propaganda? pic.twitter.com/xIRCGEQoNB

So this just randomly printed on one of our work printers. I think @pewdiepie has hacked our systems. pic.twitter.com/wSG9cprJ4s

@grandayy @DolanDark @pewdiepie ok so basically a printer at a friend's workplace got hacked. not complaining pic.twitter.com/DcNGrKlbXj

An unnamed entity sporting the handle @TheHackerGiaffe claimed responsibility for the hackings, acknowledging that they took advantage of an open network port available on hundreds of thousands of printers around the globe by means of a known vulnerability that allows printers to receive data from other sources.

Spread the word with your friends about printers and printer security! This is actually a scary matter. Will tweet everything about this entire #pewdiepie hack later to explain to everyone exactly what went down. Also @pewdiepie please notice me

“Your printer is exposed,” @TheHackerGiraffe told a Twitter user. “I’m trying to warn you to close it, how else am I gonna get your attention?”

In a Verge interview, @TheHackerGiraffe remarked that they got the idea of the amusing hack while browsing Shodan.io, a repository of IoT devices. The service claimed the identification of 800,000 printers, but @TheHackerGiraffe chose to attack only 50,000.

“People underestimate how easy a malicious hacker could have used a vulnerability like this to cause major havoc,” @TheHackerGiraffe wrote. “Hackers could have stolen files, installed malware, caused physical damage to the printers and even use the printer as a foothold into the inner network.”

@TheHackerGiraffe suggested that previously they had never considered hacking printers. Researching, downloading and scripting, however, took less than 30 minutes, a fact they pointed out was “the most horrifying” aspect of how easy it is to corrupt, conscript and enslave consumer IoT devices, including pacemakers, appliances and home security networks.