Quarrel in the Coral: Rare Footage of Octopus vs. Pufferfish Battle 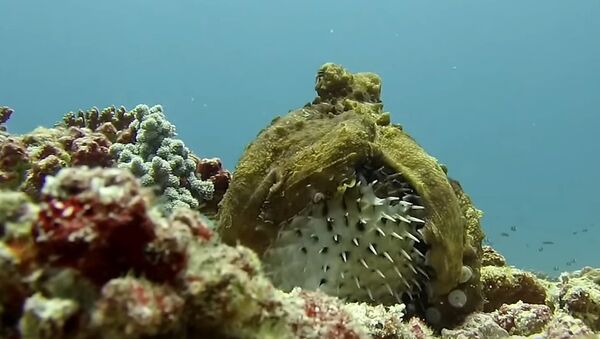 Off the coast of Fregate Island in the Seychelles, divers Chris Taylor and Carrie Miller were examining the coral reef. They managed to film a fight between an octopus and a pufferfish.

The octopus tried to drag a Pufferfish into a gap between the corals. The fish behaved aggressively, not wanting to yield to the sea creature. Then the octopus changed tactics: it left the shelter and clasped the fish with its tentacles, almost completely enclosing it, but the fish managed to repel the attack.

Specialists were left asking why the big blue octopus would take on such a creature. Nearly all pufferfish contain tetrodotoxin in their organs, a neurotoxin that makes the fish taste bad to predators and is at least 1,200 times more potent than cyanide. According to National Geographic, one pufferfish contains enough poison to kill thirty humans, and there is no known antidote.