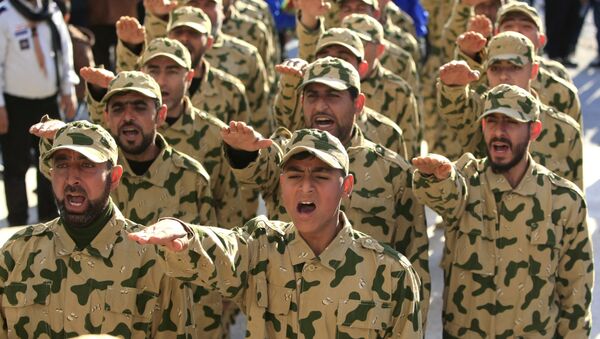 © AP Photo / Mohammed Zaatari
Subscribe
The video comes after Syrian air defence forces took out several incoming missiles launched at Al Kiswah, a city located to the south of the capital Damascus. Israel denied its involvement in the missile attack.

Hezbollah, a Shia militant group, has posted a YouTube video warning Israel against launching missile strikes on Lebanon in the wake of an unsuccessful missile attack on Syria allegedly launched by Tel Aviv.

The video, which has subtitles in Hebrew, includes what look like satellite images and precise map locations of strategic sites in the Jewish state.

The clip, which specifically shows Hezbollah fighters preparing for a missile attack and the group's leader Hassan Nasrallah pledging to retaliate against a possible Israeli strike on Lebanon, wraps up with the warning "if you dare attack, you will regret it."

The video came shortly after Syrian media reported on Friday that the country’s air defences had neutralized incoming missiles in the south of Syria as the Israeli military, in turn, denied its involvement in the attack.

Eyewitnesses have since published footage of Syrian anti-aircraft missiles appearing to intercept approaching missiles in the skies near Damascus.

The Syrian Foreign Ministry, for its part, accused Israel of conducting the Friday attack, which the ministry said was "just another piece of evidence that Israel supports terrorist groups and is trying to prolong the conflict in Syria."

In mid-November, Nasrallah warned in a televised speech that "any [Israeli] attack will definitely and certainly be responded to", a statement that followed Israeli Prime Minister Benjamin Netanyahu's anti-Hezbollah remarks.

Speaking at the UN General Assembly in September, Netanyahu provided satellite images of what he claimed were Hezbollah precision-guided missile installations at Beirut's international airport. He also accused the group of using Beirut's residents as human shields, stressing that Israel would "not let [Hezbollah] get away with" their behaviour.

Tensions between Lebanon and Israel escalated earlier this year, when senior officials from both countries openly considered the possibility of a military conflict.

Israel's plans to build a wall along Lebanon's southern border, a disagreement over a gas field in the eastern Mediterranean Sea, and the Israeli suspicion that Iran is providing military support to Hezbollah have all played a role in the deteriorating state of relations.

Israel Thanks US for Recognizing its 'Right' to Attack Pro-Iran Forces in Syria
Israel has on multiple occasions accused Hezbollah of being an Iranian "terrorist proxy", with Netanyahu warning that the Jewish state would "continue blocking Iran's attempts to use Syria and Lebanon as its forward bases to launch attacks on Israel".

In 2006, Israel invaded Lebanon in response to a cross-border raid by Hezbollah and the abduction of two Israeli soldiers. The conflict, which lasted 34 days and claimed the lives of more than 1,300 people, was halted by a UN-brokered ceasefire.