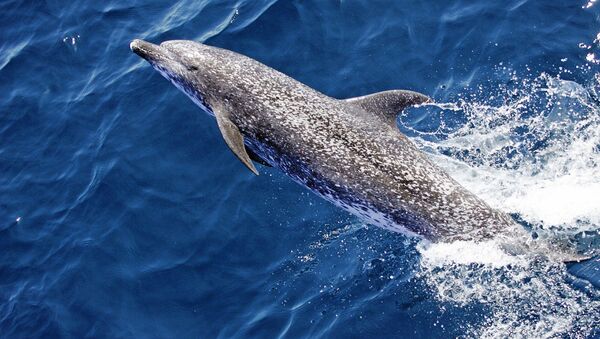 © Photo : Pixabay
Subscribe
After more than 15 dolphins washed up dead in Florida's Collier and Lee counties this week, scientists in the region are still looking for answers in their efforts to pinpoint what could be the cause for the sudden spike in deaths.

Although water samples are still being tested, there is talk among officials that an increase in red tide counts could be to blame in the spike of deaths, Allison Garrett, spokesperson for NOAA Fisheries, told Sputnik.

Red tide, also known as K. brevis, is an "unusually persistent harmful algal bloom" that produces potent neurotoxins able to affect the central nervous systems of many animals, ultimately leading to their death, according to the environmental agency.

"We do suspect red tide is the cause," Garrett said, adding that experts are also concerned about dolphins losing their source of food since "this current red tide [is] killing so many fish."

Since July of 2018, a total of 123 dolphins have been found dead on Florida shores in Collier, Lee, Charlotte, Sarasota, Manatee, Hillsborough and Pinellas counties, according to NOAA Fisheries. As a result, the agency has deemed the spike an "unusual mortality event (UME)."

"It's a very unfortunate, very unusual thing," Harbor Master Captain Robert Jacobsen told local news station WFLA. "In my 15 years, this is only the second time I've ever had to deal with a dead dolphin on the beach."

And this isn't the first time that Florida has seen such a high quantity of dead dolphins. Between 2005 and 2006, when another UME was detected, scientists determined that roughly 190 dolphins were killed off by their exposure to red tide.

Earlier this year, in September, Florida's Republican Gov. Rick Scott was booed out of a restaurant by activists over his administration's repeated moves to repeal legislation that regulates runoff from septic tanks and farms.

​However, now, months since experts first detected red tide along Florida's panhandle, waters in the Sunshine State's northern neighbor, Alabama, have tested positive for the toxic algae, according to a recent public advisory notice issued by the state's Department of Public Health.

"The Alabama Department of Public Health cautions the public that water samples collected from Alabama Point to Little Lagoon Pass in Baldwin County indicate the presence of red tide cells in the low to medium range," the statement reads, urgering locals to be cautious when entering the water.

According to AL.com, the Heart of Dixie has since closed off shellfish growing waters in Mobile and Baldwin counties, in addition to several other advisory notices to the public. Officials have stressed for the public to heed such notices in order to avoid experiencing breathing complications and skin irritation.

000000
Popular comments
Just wait, Trump has approved the OIl Industry to do Seismic surveys on the Atlantic coast which can harm most mammals
Shadowlady8
1 December 2018, 05:16 GMT1
000000
First ones I would be talking to is the Navy.