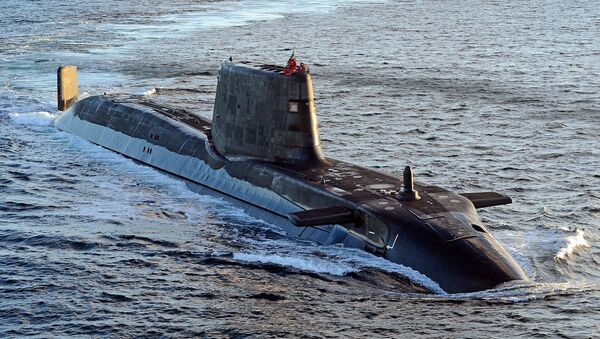 Last month, the UK's Royal Navy reported that its high-readiness frigate, the HMS St Albans, shadowed and monitored a Russian warship travelling through the English Channel, in an attempt to protect British waters.

The UK Royal Navy's recent naval drills involved the HMS St. Albans, a Type 23 frigate, as well as the hunter-killer submarine HMS Astute. These "have sharpened their teeth to counter the looming threat of Russia's resurgent underwater fleet", according to the Portsmouth newspaper The News.

"To be the best at what we do, it is essential that we train both against and alongside the very best. The HMS Astute provides that partner, with whom we can polish our skills to the highest level," John Cromie, commanding officer of the St Albans, said.

His remarks came after a Royal Navy spokesman said that the Portsmouth-based HMS St Albans had been tasked with keeping watch on the Russian Slava-class cruiser Marshall Ustinov, which travelled through the English Channel in mid-November.

The spokesman signalled the UK frigate's readiness "to monitor the Russians as they entered the Channel, taking over the watch from the French warships".

St. Albans commanding officer John Cromie, for his part, underscored that "in this instance, the interaction between St. Albans and Marshal Ustinov has proven both cordial and professional, reflecting the mutual understanding of customs that exist between professional mariners."

The statement followed that of Vice Admiral Andrew "Woody" Lewis, head of the US Navy's Second Fleet, who warned of a "real Russian undersea threat" in the Atlantic Ocean. "They are very competent," he added, apparently referring to Russian crews' alleged actions in the area.

In August, Captain Jerry Kyd of the Royal Navy's aircraft carrier HMS Queen Elizabeth, alleged that the last couple of years have seen "a frightening increase" in Russian naval activity in the Atlantic region, which he claims "just underlines why we need to maintain a balanced, strong and able, capable fleet."

UK Army Chief's Talk of Russian Military Threat is a 'Smokescreen' – Analyst
Earlier, the UK frigate HMS Westminster was scrambled to escort two Russian frigates and their support vessels, which were returning to the Baltic after operations in the Middle East.