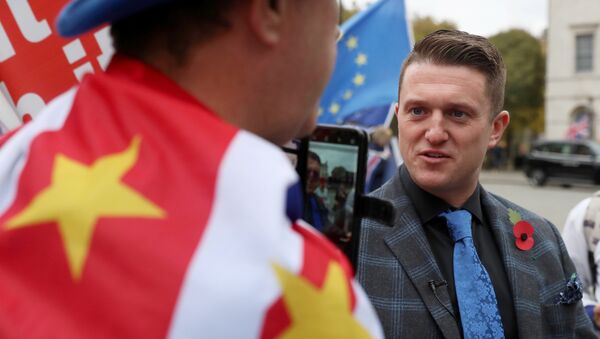 © REUTERS / Simon Dawson
Subscribe
The incident, which received plenty of media coverage in the UK, involves a Syrian refugee being 'waterboarded' by a classmate. However, Robinson claims, what the media failed to report was that the victim had earlier attacked a white girl - and allegedly hit her with a hockey stick.

The family of a Syrian boy has threatened to sue UK right-wing activist Tommy Robinson after he claimed that the teen was attacked in retaliation for an assault on a white girl.

Tasnime Akunjee, a solicitor representing the boy and his family, claimed, as quoted by The Independent, that his client "had nothing to do with the attack [on the girl] at all". Describing Robinson's comments as 'defamatory', he said that the family would be taking legal action against the English Defence League's co-founder.

READ MORE: Activist on Tommy Robinson Case: 'The Establishment Don't Like Him'

The story of the Syrian teen has splashed across national headlines in the UK this week after a video emerged showing the 15-year-old being pushed to the ground as another student squirted water from a bottle in his face. In a separate incident, the boy's 14-year-old sister was shoved around by students and pushed to the ground as her hijab came off. The videos were reportedly shot late October at the Almondbury Community School in Huddesrfield.

I am absolutely disgusted and mortified by the level of hate and ignorance shown by the cowards in this video. It is of a Syrian refugee who has been bullied constantly in Almondbury High School where apparently…this hasn't been taken seriously. #Share #Justice @georgegalloway pic.twitter.com/WqPvqLuFBE

The 'waterboarding' incident sparked public outrage and protests from locals, and also triggered a police investigation into racially aggravated assault.

Tommy Robinson, however, alleged in a Facebook post, citing messages sent to him after the attack, that the Syrian youngster had earlier 'bullied a girl out' of the school by hitting her with a hockey stick. According to screengrabs of the messages, multiple complaints had been submitted regarding the boy's behaviour.

This was corroborated by what was reportedly said by the girl's mother. She claimed that the boy, Jamal, and another three girls had beaten her daughter on the head. "The school never rang the police or anything and a fund page wasn't set up for her," the woman lamented, referring to the crowd-funding page for the Syrian, which has collected over £130,000 ($166,000) from well-wishers.

Robinson, whose real name is Stephen Yaxley-Lennon, entered the national spotlight in the UK in 2009, when he founded the EDL, a right-wing activist group that has drawn criticism for its vocal anti-Islamic stance and street demonstrations.

Last week, he was appointed special advisor on rape gangs and prison reform to Gerard Batten, the leader of the UK Independence Party.

Rape gangs apparently are a subject of particular interest to the 36-year-old activist. This May, he was sentenced to 13 months in prison on charges of contempt of court for live-streaming a video of members of an alleged Muslim grooming gang outside a courthouse. He was released on bail on November 5; after his release, he scolded British courts and media for attempting to "silence and stop people having the knowledge" of the gangs.

000000
Popular comments
crowd-funding page for the Syrian, which has collected over £130,000 ($166,000) from well-wishers..... again, the perpetrator gets the sympathy. Absurdistan is finished; it is karma for their part in WWII. So glad I am out of that multi-cultural s***hole.

keyboardcosmetics
30 November 2018, 12:46 GMT3
000000
Newsfeed
0
New firstOld first
loader
LIVE
Заголовок открываемого материала
Access to the chat has been blocked for violating the rules . You will be able to participate again through:∞. If you do not agree with the blocking, please use the feedback form
The discussion is closed. You can participate in the discussion within 24 hours after the publication of the article.
To participate in the discussion
log in or register
loader
Chats
Заголовок открываемого материала
Worldwide
InternationalEnglishEnglishMundoEspañolSpanish
Europe
DeutschlandDeutschGermanFranceFrançaisFrenchΕλλάδαΕλληνικάGreekItaliaItalianoItalianČeská republikaČeštinaCzechPolskaPolskiPolishСрбиjаСрпскиSerbianLatvijaLatviešuLatvianLietuvaLietuviųLithuanianMoldovaMoldoveneascăMoldavianБеларусьБеларускiBelarusian
Transcaucasia
ԱրմենիաՀայերենArmenianАҧсныАҧсышәалаAbkhazХуссар ИрыстонИронауОssetianსაქართველოქართულიGeorgianAzərbaycanАzərbaycancaAzerbaijani
Middle East
Sputnik عربيArabicArabicTürkiyeTürkçeTurkishSputnik ایرانPersianPersianSputnik افغانستانDariDari
Central Asia
ҚазақстанҚазақ тіліKazakhКыргызстанКыргызчаKyrgyzOʻzbekistonЎзбекчаUzbekТоҷикистонТоҷикӣTajik
East & Southeast Asia
Việt NamTiếng ViệtVietnamese日本日本語Japanese中国中文Chinese
South America
BrasilPortuguêsPortuguese
NewsfeedBreaking
03:42 GMTHis Life, His Rules: Biden Spotted With Mask Down on His Chin While Inside Shop
03:28 GMTSouth Africa Laments Travel Restrictions, Calling Them ‘Punishment’ For ‘Excellent Science’
02:57 GMTGhislaine Maxwell Ready to Take Stand at Trial to 'Save Her Own Life' - Report
01:58 GMTMike Tyson Reveals Marijuana Makes Him 'Different Person' as He Launches New Cannabis Line
01:52 GMTConcerns About Spread of New Covid Strain Rise as Another Migrant Caravan Crosses Into US - Report
01:28 GMTMass Theft Occurs at Best Buy Store in Minnesota, Police Say
00:26 GMTTrump Keeps Mt. Rushmore Sculpture With His Face on It on Display in His Office
00:01 GMTA Glimpse of Hope: Biden Approval Rating Climbs 2 Points, But Still Scores Low on Economy - Poll
YesterdayAbbott Says Texas Is Ready For Possible Cold Winter Due to ‘Dozen Laws’ Signed
YesterdayBarnier Says France Has to 'Be Ruthless With the British' Amid Migrant Crisis - Report
YesterdayEx-Labour Leader Corbyn Slams 'Irrational' Suspension From Party One Year On
YesterdaySudanese Army Repels Attack by Ethiopian Troops With Casualties on Both Sides
YesterdayWHO Says No Need for Panic Over Omicron Coronavirus Strain as Much Remains Unknown
YesterdayBiden's First Christmas Tree Will Reportedly Cost Taxpayers $139,000
YesterdayMemes Flood Twitter After WHO Dubs New Covid Strain Omicron
YesterdayOmicron Coronavirus Strain May Already Be in US, Going to Spread 'All Over', Fauci Says
YesterdayNCT 2021 Walks Into a Dream in New Teaser Video 'Year Dream: Stage 2 - Surfing in Our Dreams'
YesterdayWHO Confirms Some Guesses on Why It Skipped Two Letters and Named New COVID Variant 'Omicron'
YesterdayFrance Mulls Autonomy for Caribbean 'Confetti of Empire' Amid COVID-19 Rule Protests
YesterdaySolomon Islands Gripped by Anti-China Protests as US Keeps Largely Mum