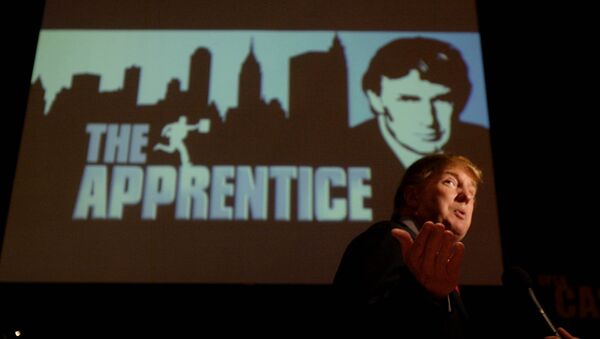 © AP Photo / RIC FRANCIS
Subscribe
In the wake of his summit with North Korea’s Kim Jong-un in May, US President Donald Trump told reporters that ‘everyone’ thought he deserved the Nobel Peace Prize, but he ‘would never say it’ because the only reward he really longed for was ‘victory for the world’.

US President Donald Trump has suggested that will not be honoured with a Nobel Peace Prize for his efforts to denuclearise North Korea, just like his show ‘The Apprentice’ never received an Emmy Award, the New York Post reported.

‘Well, they’ll never give it [Nobel Peace Prize] to me. We should have gotten the Emmy for “The Apprentice”, you know? I had the No. 1 show, “The Apprentice”’, Trump said.

The comparison between the Nobel Prize and the Emmys has divided social media users, with many bombarding Twitter with posts full of outrage…

I don’t think comparing @NobelPrize to @TheEmmys for reality shows will help @realDonaldTrump’s non-existent chance of getting the #NobelPeacePrize (Also, @AmazingRaceCBS was far better than @ApprenticeNBC) https://t.co/bpGqgd9425

Today our president, @realDonaldTrump, compared not being awarded the @NobelPrize to not winning an @TheEmmys for the reality show he hosted.

That is a thing that happened today. This is our reality.

…and saying that 45 didn’t deserve the peace prize:

File this under: DUH.

No but the Darwin prize is a possibility

Some suggested that he’d not even be able to win a spelling contest, let alone a prize for diplomatic efforts:

He couldn’t even win a spelling bee.

Omg trump just said they’ll never give him a Nobel peace prize just like he was robbed of an Emmy 4 the apprentice. HAHAHaaaaaa. dude. you know you have to actually do something useful and good in order to receive this. Right??!? https://t.co/uzfE3kdrIA

Others jumped to his defence, stressing that the once-prestigious award has discredited itself and saying that Barack Obama didn’t deserve the prize either because he was the US President for less than 9 months when he was awarded:

Does anyone respect the Nobel prize anymore? When Obama was awarded one for doing zero, we all knew it was a joke and that it had been taken over by deep state like everything else. So, NOT receiving one is now very prestigious. Congratulations if you don't get one, POTUS!!

They also added that Trump didn’t need the award, because he had already brought peace to the Korean Peninsula, which is worth more than the Nobel prize:

Just looked at the TV and saw Cuomo and Lemon laughing their heads off. TVs are on mute (thank God), but under them it says 'Trump predicts he will never get the Nobel Prize'; is that hilarious? He doesn't need it, he helped bring peace to Korea (hope it's forever). Reward enough

@RealDonaldTrump, mediocrity doesn't recognize #greatness. You know that. Great leadership leaves a legacy behind that NO ONE can erase. That's worth more that Nobel Peace Prize.

Maybe not Mr. PRESIDENT, but all of your people are grateful for having you as our President. And we know you bring us peace!

Earlier this year, two Norwegian lawmakers nominated President Trump for the Nobel Peace Prize for his work in reaching an agreement on North Korea’s denuclearisation. Even South Korea’s president Moon Jae-in suggested that if accomplished, his efforts would be worthy of the honour.

‘I just think that President Moon was very nice when he suggested it. I want to get peace. The main thing, we want to get peace. It was a big problem, and I think it’s going to work out well’, Trump said back in May when asked about his Nobel prospects.

Barack Obama Might Lose His Nobel Prize & See Donald Trump Get It
The state of affairs on the Korean Peninsula largely improved earlier this year after the leaders of North and South Korea kicked off bilateral talks in a joint pledge to reach a peace treaty.

A second Kim-Trump meeting is expected to be held in the next few months.