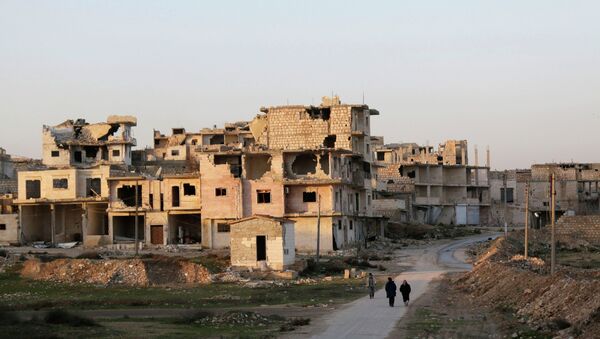 Terrorists are planning to carry out chemical attacks on a town in Hama and the humanitarian corridor in Idlib, Russian military.

Terrorists from the Hayat Tahrir Ash-Sham group (former Nusra Front*) are planning a new provocation with the use of toxic agents in the Idlib de-escalation zone, the Russian Center for Syrian reconciliation reported on Thursday.

“According to information received by the Russian Center for Syrian Reconciliation from sources in the Idlib de-escalation zone, the terrorists of the Hayat Tahrir Ash-Sham group are planning to carry out another provocation using toxic agents,” the center said in a statement.

Militant Shelling Kills at Least 6 Syrian Soldiers in Hama – Russian MoD
According to the statement, the terrorists have delivered 60 canisters filled with an unidentified highly-toxic chemicals. They are accompanied by Arab-speaking chemical specialists from one of the European countries.

"According to available information, the upcoming provocation with the use of toxic agents will target the Christian-majority town of Maharda in Hama province and the humanitarian corridor near ​​the village of Abu al-Duhur in Idlib province," the statement said.

In September, Russian Foreign Minister Sergei Lavrov has addressed the 73rd session of the UN General Assembly in New York City, warning that Syrian terrorists and their patrons may attempt new provocations using chemical weapons, adding that Russia would consider such efforts this "unacceptable."

*A terrorist organization, banned in Russia and a number of other countries.