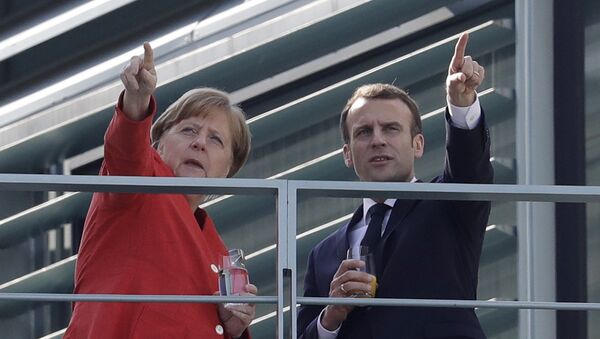 © AP Photo / Michael Sohn
Subscribe
International
India
Africa
BRUSSELS (Sputnik) - A number of EU members, including France and Germany, have considered it premature to toughen sanctions against Russia over the Kerch Strait incident despite Poland's eagerness to impose new restrictions on Moscow, a diplomatic source in Brussels told Sputnik on Thursday.

The German Die Welt newspaper reported on Wednesday, citing diplomatic sources, that France and Germany had called for tightening the existing EU sanctions against Russia due to the escalation in the Kerch Strait. However, in the statement issued by the bloc's foreign policy chief, Federica Mogherini, the European Union expressed its concern over the increased tensions in the region but failed to mention any new sanctions.

'It took [the EU members] three days to coordinate the statement. Poland suggested mentioning in it new sanctions against Russia, but a number of EU members, including France and Germany, considered it premature to announce new restrictive measures on Russia at that point', the source said.

World
Ukraine to Ask Turkey to Close Bosphorus to Russian Ships Amid Kerch Strait Rift
The incident took place on Sunday when three Ukrainian naval vessels, heading from the Black Sea to the Azov Sea, tried to pass through the Kerch Strait, connecting them, without obtaining a permit from Russia and thus illegally crossing the country's sea border. The vessels have been seized by the Russian side and a total of 24 Ukrainian servicemen have been detained by authorities.

Commenting on the incident, Russian President Vladimir Putin said that it was a provocation on Kiev's part and was related to the low approval rating of Ukrainian leader Petro Poroshenko ahead of the nearing presidential election. Putin noted that two Ukrainian Security Service officers were among the crew at the time and were effectively in charge of the operation. The president also stressed that Russian border service agents were fulfilling their duty to protect the country's borders.

Following the incident, the Ukrainian authorities introduced martial law in certain regions of the country on Monday 30 day-long martial law, which provides for temporary restrictions of constitutional rights and liberties, including the right to participate in elections.